28 Young Gorillas Get Names in Ceremony 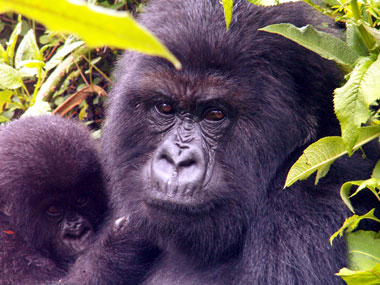 The main event of June was the long-awaited ORTPN gorilla naming ceremony, held at Kinigi, which was attended by the president of Rwanda, Paul Kagame, and more than 2,000 people from the local area.
With speeches by the prefect of Ruhengeri and the president, as well as exhibitions of traditional music and dance, the ceremony was a huge success in publicizing the gorillas to a national and international audience, as well as to the local population, who are most affected by the park.
A long time in the planning, this ceremony saw 28 young gorillas given names, including 13 from the Karisoke research groups. 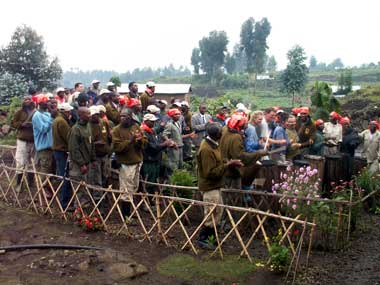 For each gorilla, three names were proposed by the groups' trackers and one of these was then chosen by an honored guest, including Dr. Katie Fawcett, the director of Karisoke.
Dr. Fawcett chose the name Turibamwe for Maggie's infant, who was born into Pablo's group, one of the three monitored by Karisoke staff. The name means “we are all the same” in Kinyarwanda and represents the spirit of unity in the country after its difficult recent history.

Among other events in June, the “Partners in Conservation” team (PIC), from the Columbus Zoo in Columbus, Ohio, visited the Karisoke Research Center.
PIC is a supporter of our work here, providing financial support, publicizing our activities, and helping to raise awareness of the work we do and the conservation issues surrounding the gorillas. Each year representatives from PIC visit to see what their support achieves and how they can help in the future. The team brought gifts for the field staff, including much-needed socks and gloves, as well as education materials for both Karisoke and local schools.
We are also pleased to announce that PIC has agreed to continue to contribute to the wages of Karisoke field staff, a significant effort, considering we now have more than 40 trackers working in the forest!
Karisoke showed its appreciation by holding a party at the Bisate staff house in PIC's honor, with the Karisoke dance and drum team entertaining the audience with their usual high-spirited performance.

Another visitor to Karisoke this month was Rick Lobello of the El Paso Zoo in Texas, where he is responsible for education activities.
Rick has volunteered his time to write a guidebook for the Parc National des Volcans in collaboration with DFGFI and ORTPN (the Rwandan Office of Tourism and National Parks).
The guidebook is expected to be available from the end of next year and will provide an invaluable guide to the park's biodiversity and to the surrounding area and people.