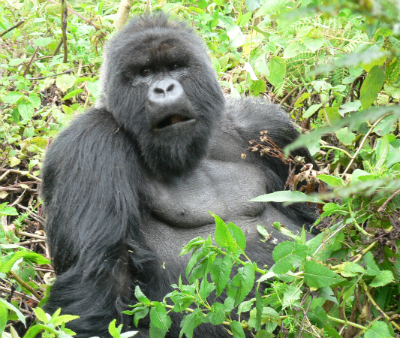 Since its formation in 2009, Ntambara’s group has been one of the most stable among the gorilla groups monitored by the Karisoke™ Research Center. The group has grown from nine to 11 gorillas in the past few years and has seemed to function peacefully as a family unit until now.The group is led by dominant silverback 25-year-old Ntambara, with 20-year-old silverback Ugutsinda serving as the beta male. Ntambara and Ugutsinda are brothers, both offspring of (now deceased) female Kwiruka.

Ntambara has led the group without any question or competition until recently, when Ugutsinda began to show clear signs of dominance over his brother. One such dominance behavior occurred on November 24th, when Ugutsinda displaced Ntambara at the feeding site. One would have expected Ntambara to reply with a pig grunt and ignore the attempt, but surprisingly, this did not happen and Ntambara left the site to his brother, without showing any sign of reluctance. 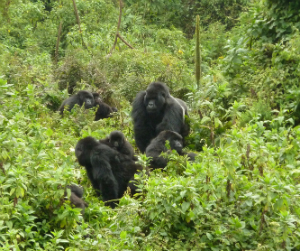 On the same day, 8-year-old female Kunga, one of the group's sexually receptive females, solicited dominant Ntambara for mating. Ugutsinda immediately intervened, charging the couple and interrupting the intercourse. Once again, Ntambara submitted and quietly took his leave. Displacements were observed on two other occasions while the group was traveling. Ugutsinda even overtook Ntambara in the processional line, physically leading the group as if he were the dominant silverback.

In addition to these incidents, Ugutsinda has displayed his growing dominance through strong bonds with the group’s females (especially compared to Ntambara). The females are choosing to remain close to Ugutsinda and, since the month of October, all of the observed copulations were initiated by him.

During this time, Ntambara has begun traveling on the periphery of the group with increased frequency. In one such situation, Ntambara was absent from his group during an interaction with Umubano’s group on November 9th, during which Ugutsinda successfully protected Ntambara's group, filling the role of the dominant silverback. 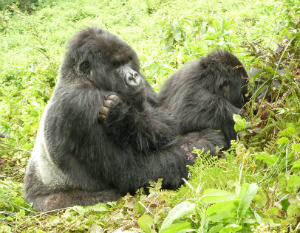 During Karisoke's 44 years of observing mountain gorilla behavior, few changes in dominance between silverbacks have been observed. Every instance has followed a change in dynamics related to differences among groups and gorillas. This latest observed case will provide another important example of the flexibility of the gorillas' social dynamic.

Our Karisoke researchers are continuing to collect thorough data focusing on the dominance behaviors between the two silverbacks. We will certainly need more evidence before we can formally name Ugutsinda as the group leader, as Ntambara has been the undisputed dominant silverback for quite some time.