On the way to Rwanda for his first trip to see the mountain gorillas, board member emeritus Glenn L. Felner had an unusual experience, and the adventure proved to be life changing in many other ways. 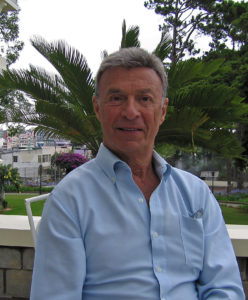 Felner, a licensed transport pilot, was asked to sit in the cockpit of the British Airways flight from London to east Africa, since the flight was overbooked. That was 1989. He had recently seen the movie “Gorillas in the Mist,” and was determined to see the gorillas for himself. “Rwanda is so beautiful and it felt so freeing as I drove from Kigali toward the national park,” he remembers. Then, after trekking for about three hours in heavy rain, the sun came out and there in front of him were the gorillas. The younger gorillas were running around and showing off, he says, while one of the mothers, who was breastfeeding her infant, jumped up and knocked over the park guide, he says, in a show of protection.

The next day Felner was eager for a second visit, so in borrowed shoes (his were full of mud from the rainy day before), he made another visit to the gorillas, this time in beautiful sunshine. Felner was so taken not only with the gorillas but with the local people and the country’s beauty that he contacted the U.S. consulate in Kigali to learn more about how to get involved with Rwanda. This led to a meeting with the Rwandan ambassador to the U.S. in Washington, D.C., and then to a position as honorary consul general to Rwanda, a position he held for about 22 years and that allowed him to help promote business, trade and educational opportunities for Rwanda.

Felner was trained as a journalist and initially worked for the Chicago Sun Times, but eventually started an insurance business. Earlier, he had fought in World War II in the final days of the Battle of the Bulge (the Ardennes) in France. He’s received both the U.S. Army Bronze Star and the French Legion of Honor decoration for his heroic activities.

Getting even more involved

The trip to Rwanda also led Felner to become a conservationist. He was already an animal lover, and has a special interest in dogs and home-less pets, currently serving on the board of PAWS-Chicago. He joined the Fossey Fund board in 2001 and served for many years before retiring. Now, in addition to being a board member emeritus and long-time supporter, he is also a legacy donor, which means that he has put the Fossey Fund in his estate plans. “My feeling is that it’s good to give as much as possible while alive, so you can see what’s happening with the money. But I also believe that leaving money to the right causes is the best thing to do with one’s estate. I feel I should give to the causes that reach my heart, and Rwanda is one of my dearest targets — the country, the animals and the people too.”

Felner is proud of the work that the Fossey Fund has done for the gorillas and for conservation in Rwanda, helping to preserve the natural beauty of the country, he says. It is important to continue not only the direct gorilla protection but the education and community efforts to help protect the gorillas, he says, because “once they’re gone, they’re gone.”