A Special Year for a Mountain Gorilla Conservation Partner 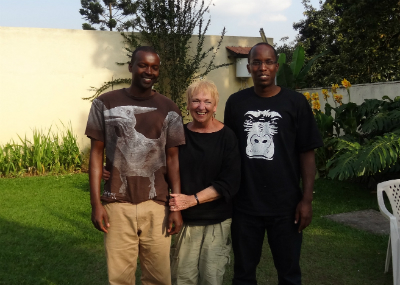 This is a special time for the Dian Fossey Gorilla Fund’s 22-year relationship with Partners In Conservation at the Columbus Zoo and Aquarium (PIC). Every year since 1991, PIC has donated funds raised by local volunteers and zoo staff to support the Fossey Fund and other gorilla conservation and humanitarian projects in Rwanda and the Democratic Republic of Congo. And, each year for 20 years, PIC founder Charlene Jendry and colleagues have spent seven weeks in Rwanda meeting with their conservation partners, including the Fossey Fund’s Karisoke Research Center to personally interact with the field staff and community people who protect gorillas every day.

But this summer, the Columbus delegation’s visit to Rwanda inaugurated a new project that PIC will support in 2014: a Learning Center for the Bisate School, which is located near Volcanoes National Park and includes Karisoke staff children among its 2,300 primary and secondary students. In addition, the Fossey Fund’s conservation education program manager, Joseph Karama, is paying a return visit to Jendry’s home town, to share his experiences with conservation education at the Rwandan Fete, PIC’s principal fund raiser; speak at a school that helps support PIC’s work; and get to know the Columbus community.

“What makes this collaboration very special is that it’s a well-established partnership,” says Jendry. “Karisoke and PIC have been working with the Bisate school for a long time. When we visited the school Joseph and Karisoke Director Felix Ndagijimana accompanied us. We also spent four hours with the Karisoke field staff, and the teachers came with us. The trackers’ kids go to the school; the PTA is flourishing. It’s a wonderful circle that is helping the kids reach their full potential.”

Jendry had met Dian Fossey in the 1980s when Fossey visited the zoo while Jendry was a gorilla keeper. Later, she spent six months studying gorillas at Karisoke. Jendry and three Columbus Zoo docents founded PIC in 1991 with the support of then Zoo Director Jack Hanna. They started by helping to fund repairs to Karisoke’s buildings that had been damaged during the Rwandan civil war. Over the years, PIC expanded its support to include an annual gift to help fund the anti-poaching team, donate school supplies and equipment to the Bisate School, and enable Rwandan conservation biology students (selected by Karisoke’s director) to conduct research for gorilla-related undergraduate theses.This year, PIC enabled Fossey Fund's Karisoke research assistant Jean Paul Hirwa, a biotechnology major, to write his thesis on antibiotic-resistant E. coli in mountain gorillas in Volcanoes National Park.

PIC, like the Fossey Fund, emphasizes education as key to empowering local people to support conservation. Their donation helps Karama conduct a conservation education program, developed by Disney’s Animal Kingdom, at primary schools near the park. PIC’s support for the program will expand from four to six schools this year.

Construction of the Learning Center will begin in January, with the opening planned for July 2014. A librarian has already been hired so that she can be involved in the development of the center, which will include a library and 20 computers. Each primary school student will receive one hour a week of computer instruction in the center, which will help them do well on Rwanda’s national exams. Bisate’s secondary school students and community residents will also be able to use the computers.

Some of the funds for PIC’s annual donations are raised by 10,000 students at 35 Columbus-area schools, who also send a personal gift such as book marks. This year, teachers at each of the participating Columbus schools asked their classes to choose their favorite book about a forest animal, purchase it for the Learning Center library, and sign it. All the staff and volunteers at the Columbus Zoo also gave books which they signed, and Jack Hanna signed and contributed one of his books. The Bisate School will become the first primary school in northwest Rwanda to have a library. 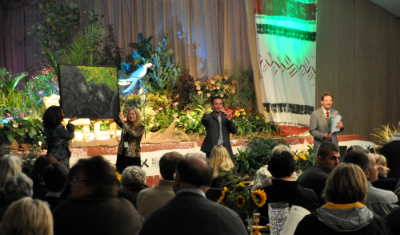 Karama says that PIC’s name is fitting, because “they are great partners in conservation indeed! The support they give us to run the conservation education program in the primary schools here is making a real difference.” He found that since his program began in 2009 the children have eagerly learned the English names of animals found in the park, including children who have not yet been in the program but heard their peers practicing the names. “The children now love animals and are very concerned about their welfare. They want to help. The teachers also seem to have picked up an interest in researching and teaching more about animals. On my invitation to speak at the Fete, I think it is further testimony that PIC believes in the work we are doing in Rwanda and would like to encourage more support for it from the American public.”

Jendry is delighted that Karama can bring his success stories to Columbus. She says “he is a remarkable man, kind, enthusiastic, and professional, who cares about conservation and education. He is able to transmit his enthusiasm to others.”
This year’s Rwandan Fete, in addition to featuring Karama as keynote speaker, continues PIC’s tradition of celebrating Rwandan culture by including Rwandan-themed food, drumming, and an “African marketplace” for crafts made by 16 artisan cooperatives that PIC has been supporting in Rwanda for many years. As always, the fete sold out well in advance.

“The original idea of supporting the artisans was that they won’t have to go into the forest for resources such as game and firewood if they can make a living by selling crafts,” says Jendry. “Then we found out that the connection between their work and our support for conservation projects has had a profound effect on them. There’s a link to a project that employs 900 ex-poachers to clean garbage and invasive species from the forest. The artisans really understand now that conservation works for them too, and that we care about people as well as animals.”