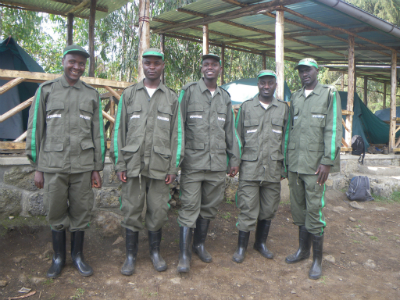 The Dian Fossey Gorilla Fund is very happy to introduce our new, additional anti-poaching team, which began its first patrols in Volcanoes National Park this week. This new team will supplement the team we already have in the field, in order to better protect the gorillas and to respond to specific challenges posed by the increase in the number of gorilla groups we monitor and their expanding range.

The demographics and ranging patterns of the Fossey Fund’s research groups have changed significantly since 2007, when the three groups we monitored — Pablo, Shinda, and Beetsme — began splitting off into as many as 10 groups. In 2007, when we monitored just three groups, we maintained two anti-poaching teams, who patrolled the park seven days a week, supplementing the efforts of the Rwanda Development Board (RDB, park management) to ensure that the forest was free of illegal activities. However, as we began to monitor new groups, we had to assign the members of one anti-poaching team to monitor the new gorilla groups that were forming, reducing the number of people in the field specifically devoted to anti-poaching activities.

Although we are happy to see the gorilla population continue to grow, we have faced an ongoing struggle to provide adequate protection for them. Our groups range over a large expanse of forest, often spreading thin the efforts of our anti-poaching team. As Karisoke Research Center Director Felix Ndagijimana explains, “For example, when we had one team and they would do cross-border patrols or shock patrols [with RDB], some areas of the park where gorillas were ranging could not be covered. So the idea is to have one team that can work with RDB for the shock patrols and the cross-border patrols, but also have one team that can go where our groups are.”

Recently we have found high numbers of snares in areas like the bamboo zone, which are visited by gorillas seasonally. This is because our anti-poaching team must focus on areas where gorillas are currently spending most of their time. When the gorillas return to these seasonal ranging areas after a period of absence (along with our trackers and anti-poaching teams), we often find that poachers have been active in the meantime. For example, Pablo’s group spends the majority of its time high up in the sub-alpine and alpine zones of the park, but comes down to the bamboo zone to feed on bamboo shoots when they are available. Unfortunately, when the migration occurred most recently, the group encountered many snares in the bamboo zone. This suggests that poachers know where gorillas (and therefore trackers) are and that they set their snares in those areas that are not being regularly patrolled, to increase the probability of their snares not being found and destroyed by our field staff. 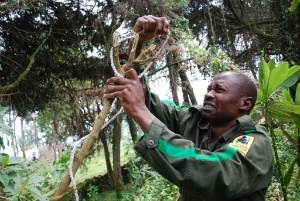 Ndagijimana says, “When the gorillas are back, and we don’t know the status of the area snare-wise, there’s high risk that gorillas will end up in snares before the snares are destroyed.” With this new, additional team, we hope to be able to patrol both where the gorillas are ranging presently and in the areas that they use less frequently, so that when they do begin using them again, they have already been checked for snares.

The new anti-poaching team is made up of five members, who were chosen from an applicant pool of over 400. Although the extremely high number of applicants made the decision-making process difficult, it is also exciting to see this level of interest in the Fossey Fund and in field positions.

The new members of the anti-poaching team are Eustache Hitayezu, Kevin Irakoze, Fabrice Tuyisenge, Eustache Nahimana, and Jean Claude Iyamuremye. Our most experienced team members are now in the process of training them in the field. We are happy to know that the mountain gorillas now have greater protection as the new, additional anti-poaching team begins its work.