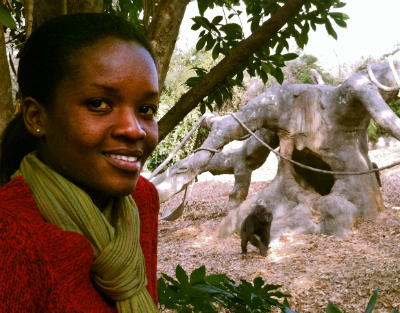 Now just 26, Bernadette Arakwiye – a native of Kigali, Rwanda– has become a world traveler, a scientist and a role model for other Rwandan science students during her three years as a research assistant at the Karisoke Research Center. Now, she is entering the second semester of coursework towards a Master of Science degree in conservation biology, at Antioch University’s New England branch in Keene, New Hampshire. We were able to interview her when she visited our headquarters in Atlanta Georgia during her holiday vacation.

Arakwiye first saw Volcanoes National Park in 2006 as a second year zoology student at the National University of Rwanda (NUR) when she took one of the field research courses Karisoke provides. The forest environment was an eye-opener. “I didn’t know it was there! I thought I would be studying animals in labs.” Instead, she wrote her undergraduate thesis on “Positional Ecology of the Golden Monkey” after studying the monkeys in their natural habitat for three months with Karisoke’s education program. The study involved observing how the animals sat, walked and so on as they carried on their daily activities – very actively.

“You can’t sit down to watch them,” she says. “They don’t have resting periods like the gorillas, you have to keep moving or you’ll lose track of them. But they range in level areas, like the bamboo zone.”

After graduation, Karisoke hired her. They were already acquainted with her keen intelligence and dedication, but it did not escape notice that she had graduated first in her class and was the top female science student at the university!

At Karisoke, Arakwiye built on her undergraduate project by observing the monkeys for a longer period, during different seasons. This led to an invitation to present her research in Kyoto, Japan as a poster at the annual conference of the International Primatological Society (IPS). She also had an opportunity to attend a training in Madagascar sponsored by the Tropical Biology Association. At both these events, especially IPS, she was able to network with primatologists from many countries.

“IPS was a really big conference, and very intense” she says. “I also had a grant for a week of pre-Congress training where I learned about primate research and conservation all over the world, including some about species I had never even heard of.”

In the spring of 2010 Arakwiye served as an assistant to one of the mountain gorilla census team leaders. One of just two women who worked on the census, along with Karisoke’s Theodette Gatesire, she kept up with her all-male team across rough mountain terrain. Each team was required to find three fresh gorilla nesting sites each day. The census found that the mountain gorilla population had increased significantly since the previous count in 2003.

“I was very happy that walking all those kilometers was rewarded with good results,” she says. “I was proud to be a part of that team.” 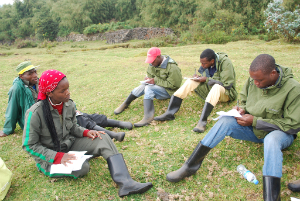 As a research assistant for Karisoke she would spend three long days a week following the monkeys – recently with added responsibility as a supervisor for other data collection staff in the biodiversity program – plus two days of data entry and report writing at the office, and passing on her field research expertise to new groups of NUR undergraduates. During this time she also picked up an excellent command of English, which is used at Karisoke for meetings and written communications. In the field, she began a new research project on the relationships among female golden monkeys within their groups. She hopes to present this study at the next IPS conference, to be held in Mexico in August, 2012.

For the moment, however, Arakwiye has two more semesters of coursework in New Hampshire to complete, and an internship already lined up for this summer at Conservation International in Washington, D.C. She is gearing up to withstand New England’s ice and snow, but seems ready for anything that will help her grow as a scientist and a conservationist.

“It’s been great so far,” she says. “My experience in the field has helped me with some of the classes. I hope in the future to qualify for another position with the Fossey Fund, and I’d like to help other students, especially women, develop more interest in science – and not be scared of the forest and other wild places. The advice I’d give them is to stay motivated, keep your interest alive and find a way to improve yourself. There are people who will help you, but you need to show your interest.”

Arikwiye's education in the U.S. has been supported by a private Fossey Fund donor, whose generosity fits well with the Fund’s long-term commitment to helping Africans become leaders in conserving their own rich heritage. “We are very fortunate to have such a bright, determined, dedicated scientist on our team,” says Karisoke’s Deputy Director Felix Ndagajimana. “Bernadette Arakwiye’s knowledge, experience and current training at Antioch University will be valuable not only to Karisoke but also to Rwanda. She is a role model and motivation for other Rwandan university graduates, especially women who wish to pursue careers in science, research and conservation.”