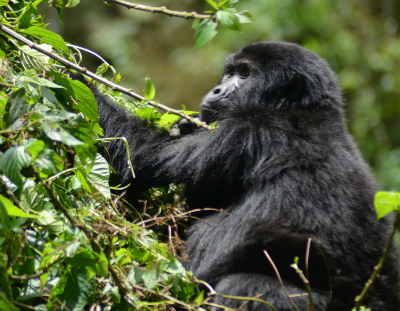 Bwindi is home to a population of mountain gorillas that is separate from the mountain gorillas of the Virungas and were once thought to constitute a separate subspecies. The latest census of the Virunga gorillas, in 2010, also showed a significant increase. The new Bwindi census began in September 2011, and the Fossey Fund provided three experienced trackers from its Karisoke Research Center to assist.

"We are very happy to hear about the increase in the Bwindi population of mountain gorillas and proud of our staff's contribution to the census,” says Karisoke Director Felix Ndagijimana. “Besides the fact that Bwindi Impenetrable Forest and the Virunga Volcanoes are the only forests on earth where we can find mountain gorillas, the differences in these two separate populations provide important clues to the evolutionary history of these great apes and to the species' adaptations to different types of forest habitats. It's very encouraging to hear that the conservation efforts both in the Virungas and in Bwindi have been so successful thus far, and we would like to congratulate our Ugandan partners and colleagues in gorilla conservation on the fantastic results of this census."

In this census, night nests and feces were documented to generate a current estimate of the population, and fecal samples were collected. Teams did two sweeps, one in September and one in November 2011, followed by genetic analysis of the fecal samples.By measuring samples of dung found in the gorillas' nests, the team could identify how many individuals were in the group and their ages.

John Ndayambaje, the Fossey Fund’s field data coordinator at the Karisoke Research Center, helped with the Bwindi census as an assistant team leader. He describes Bwindi as being a very difficult and sometimes dangerous place to track gorillas, with rough terrain, frequent heavy rainstorms, and many unhabituated gorillas. One night, says Ndayambaje, his team's entire camp was destroyed due to heavy rains, and they had to replace much of their food and equipment.
The 2011 Bwindi mountain gorilla census was conducted by the Uganda Wildlife Authority with support from l’Institut Congolais pour la Conservation de la Nature and the Rwanda Development Board. The census was also supported by the International Gorilla Conservation Programme (a coalition of the African Wildlife Foundation, Fauna & Flora International, and WWF), the Max Planck Institute for Evolutionary Anthropology, Conservation Through Public Health, the Mountain Gorilla Veterinary Project, the Institute for Tropical Forest Conservation, and the Dian Fossey Gorilla Fund International.
This census was funded by WWF-Sweden with supplemental support from Berggorilla & Regenwald Direkthilfe e.V., the Wildlife Conservation Society, and the Max Planck Institute for Evolutionary Anthropology.

For more about the new Bwindi gorilla census, click to news story: http://gorillafund.org/news–events/news_121113_bwindi-gorilla-census-shows-large-increase