Born in November 1978 and famously named by Dian Fossey, Cantsbee is the oldest mountain gorilla monitored by the Karisoke Research Center at 32 years old. The dominant silverback is beginning to show signs of his age and remained in his night nest throughout the entire day today. This behavior is clearly a cause for concern for all who have grown to love this benevolent leader of Pablo group (named after late silverback Pablo). 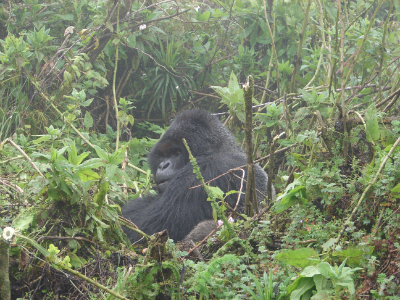 The Pablo gorillas have remained high up on Mount Karisimbi, in the Kimbagira area, for well over a month now. At such a high altitude – and with the rainy season in full swing – the temperatures have dropped to a bone-chilling low and the heavy mist has settled in all around the largest group of Karisoke research gorillas. Despite October's tempting bamboo growth at lower altitudes, this group is thought to remain high on Karisimbi primarily due to their large numbers – and the lack of any other gorilla presence – which enables them to avoid possible aggressive intra-group interactions.

Fossey Fund's Karisoke researcher Winnie Eckardt, Ph.D., along with Pablo trackers, hiked the four strenuous hours up the steep and muddy Karisimbi slopes to observe the group today. Throughout the data collection period, most of the individuals moved very little and held themselves tightly, preoccupied with keeping warm and shielding themselves from the constant rain. Eckardt was concerned to see that dominant silverback Cantsbee had not left his night nest when she arrived (although the rest of the group had) and in fact, did not move from his nest throughout her entire data collection session. Cantsbee reportedly stayed in a huddled position the majority of the time and did not feed at all. Meanwhile, beta male Gicurasi led the rest of the group 70-100 meters higher up Karisimbi. Several males lingered behind however, unwilling to leave Cantsbee.

Dr. Jean-Felix Kinani of the Mountain Gorilla Veterinary Project will accompany Karisoke researcher Stacy Rosenbaum up to Kimbagira tomorrow to make an assessment of Cantsbee's health condition. The silverback's deceased sister, Intwali, is in the back of everyone's minds, as she (suspectedly) succumbed to hypothermia last year. Dr. Eckardt is cautious about making any assumptions about his condition though, saying "we will only know tomorrow whether Cantsbee's health is truly in danger. Because he is the oldest, he simply may struggle more than the others to fight the cold temperatures."