Last week, our Grauer’s gorilla research and conservation program in the Democratic Republic of Congo was able to launch gorilla patrols again. Our trackers experienced a longer absence from the field than expected due to the security situation in Goma, the provincial capital city.

While the M23 rebel group was in control of Goma, banks and microfinance institutions were shut down and airport traffic was stopped, making it impossible for us to purchase the supplies and equipment necessary for our teams to go back into the forest or to transfer money to the field. Fortunately, we are happy to report that our teams in the REGOUWA, COCREFOBA, and RGPU nature reserves were all able to resume their work beginning last week, and will return from the field just before the holidays on Dec. 23. 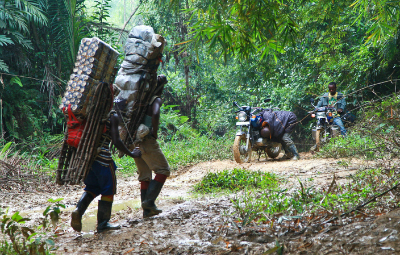 Urbain Ngobobo, the Fossey Fund’s director of the Grauer’s gorilla program in Congo, says, “The results of our last patrols were extremely encouraging, as we found ample evidence of the presence of Grauer’s gorillas in all three reserves where we work and were able to collect data that will help us establish more information about the size and demography of the population. Our field teams are excited to return to the field to carry on their work. We look forward to seeing what they find when they return later this month and we plan next steps for the Grauer’s gorilla program.”

The Fossey Fund is not alone in resuming its activities in Congo. ICCN, which manages Congo’s national parks, has recently been able to resume some monitoring of mountain gorillas in Virunga National Park, which abuts Rwanda’s Volcanoes National Park and makes up a large and important part of the Virunga protected forest area. In July, ICCN had to stop their monitoring as violence worsened in the region. On their blog, ICCN reports a happy surprise after months of absence during which gorilla conservationists across the region worried about the safety of the groups in this park. After locating all but one habituated group, they found many new gorilla infants. Unfortunately, ICCN also reports that they discovered rampant signs of poaching, especially many snares, drawing attention to how essential the rangers’ presence in the park is for keeping gorillas—and especially all these new infants—safe.

Over the past year, gorillas that the Fossey Fund monitors in Rwanda have crossed over to the Congolese side of the forest or ranged very close to the border. Karisoke Research Center Director Felix Ndagijimana says, “Historically, the Fossey Fund has played a role in cross-border patrols of the Virungas along with RDB [Rwandan park authority], ICCN [Congolese park authority], and UWA [Uganda Wildlife Authority]. Given the recent insecurity in Congo, we have not been able to participate in cross-border patrols in Virunga National Park but look forward to resuming our participation in the future. The return of ICCN rangers to Virunga National Park is a great first step in continuing to protect the entire population of gorillas in the Virunga region.”

All of us at the Fossey Fund hope for calm conditions in eastern Congo as the country and its allies work toward a peaceful resolution of the most recent crisis.