Dealing with gorilla interactions and injuries 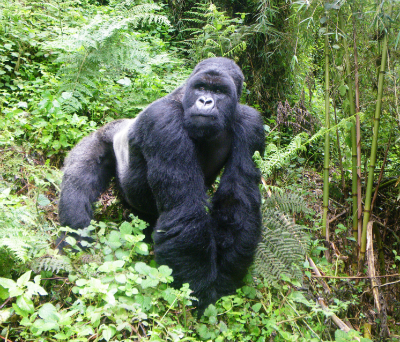 Dian Fossey Gorilla Fund trackers and others involved in mountain gorilla monitoring in Rwanda are dealing with the aftermath of a serious interaction that took place on Dec. 22, between an established group led by silverback Isabukuru and a lone silverback. When Isabukuru's team reached the group at 11:14 a.m. on that day, they found the group interacting with the lone silverback called “Rukundo,” in Rutaka area.

During the interaction, an infant was killed – the 8-month-old offspring of mother Bukima. The incident was not directly observed but Bukima was seen with blood on her chest and trackers subsequently found the infant’s body. Infanticide has been observed by Fossey staff over many decades to be a significant cause of infant mortality and is a reproductive strategy used by males to increase their reproductive success.

Another infant in the group, Icyororo, was seriously wounded during the interaction as well, with major injuries to his foot that would make his recovery unlikely without veterinary intervention. As a result, Fossey Fund staff, local veterinarians and those from Gorilla Doctors, as well as other scientists and researchers, consulted together to determine whether to intervene in this case, even though it was a result of natural occurrences. There are many factors to consider, including the likelihood of success and the disturbance to other members of the group. In an instance earlier in 2013, a decision was made not to intervene in another case of attempted infanticide, since the stress to the group in that case would have been significant, and the injury was not done by an outside silverback.

In the current case, the injuries were a result of the interference by lone silverback Rukundo. Born in 1994, he is the oldest surviving offspring of Maggie, who is the oldest living female followed by Karisoke. He became a lone silverback in March 2010, when he left his natal group (Pablo) and has not been seen very often, though he is well known to many other gorillas (and to Fossey Fund trackers) from his younger days.

Silverbacks Isabukuru and Kubaha are also badly injured, but they have always recovered in the past, so hopes for their recovery are good.

Isabukuru’s group was involved in another interaction earlier in December, which resulted in the transfer of two females from Gushimira’s group. In that interaction, Gusihimira and Kubaha sustained significant injuries as well, but were recovering well.