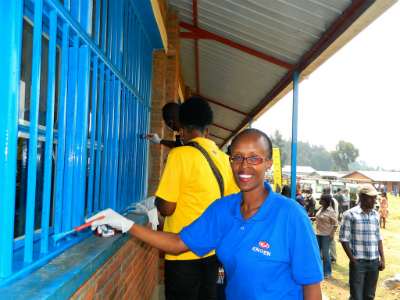 In honor of Nelson Mandela’s historic and noble life and work, the Dian Fossey Gorilla Fund’s staff in Rwanda recently hosted an afternoon of community service at the Bisate School, which is located at the foothills of Volcanoes National Park. More than 100 representatives from the South African Embassy; MTN Rwanda, the largest cellular technology company in the country; and oil and gas company Engen, as well as teachers, parents and students, joined Fossey Fund staff in the activities. The project of the day was to paint six of the classrooms at the school. The large group of participants were split into six teams, one for each classroom, offering an opportunity for everyone to get to know each other by working together.

The Fossey Fund has worked with the Bisate School for many years, as education is an extremely important aspect of conservation. The Fossey Fund’s conservation education program manager, Joseph Karama, began by thanking everyone for volunteering on such a historic day.“Mandela has spent his life giving to others and today we have an opportunity to honor him by following in his footsteps and giving back to the community where we live and work,” he said.

After several hours of work the task was completed. Following the activity, all the guests went to the Karisoke Research Center offices for lunch and a presentation about the Fossey Fund’s work to save the mountain gorillas, given by Karisoke Director Felix Ndagijimana, and Fossey Fund Chief Operating Officer/Vice President of Africa programs, Juan Carlos Bonilla.

Several representatives from the South African embassy had visited the Karisoke Research Center in March of this year. During this meeting, members of the embassy and Fossey Fund staff hatched the idea for a collaborative community service effort in honor of Mandela Day. What started as a small idea ended up being much bigger and better than anyone had expected, by joining together many influential groups in the name of community service and conservation.