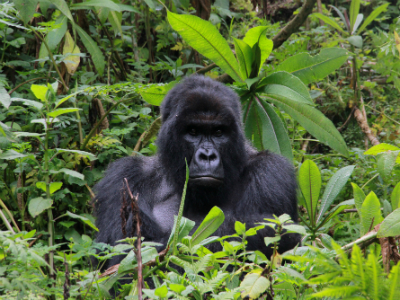 Silverback Kirahure, nearly 24 years old, is recovering after being wounded in an unseen interaction or fight with another silverback. Kirahure is the leader of a group of mountain gorillas called Kuryama’s group (named after the former dominant silverback), which is followed and monitored daily by the Dian Fossey Gorilla Fund.

On August 3, Fossey Fund trackers noticed that Kirahure had a wound on his head that was bleeding. The bleeding was discontinuous but abundant. Fossey Fund, Rwanda Development Board (RDB) and Gorilla Doctors have been in communication since then to brainstorm of possible actions and diagnosis.

On August 6, an unfortunate incident occurred when the group was approached by lone silverback Inshuti, who often approaches a group silently in his quest to gain females and start his own group. But Kirahure’s wound had started losing blood again that morning and he was observed to be weak. Indeed, when Inshuti approached him, Kirahure was too weak to follow and fell to the ground. Luckily, second-ranking silverback Vuba, young silverback Igihozo and blackback Tetero were able to fend off the intruder. By 3 p.m., Inshuti had left the scene and the group moved back to Kirahure, who was only able to walk briefly before laying down without strength. His wound was now bleeding severely.

Gorilla Program Data Officer Theodette Gatesire, who watched the entire scene, was obviously shocked: “I never saw something like that — when the wound opened again the blood was profusely coming out from Kirahure’s head. It was heartbreaking; we had little hope for him to survive. When Inshuti came, we were worried for Kirahure, but fortunately the other silverbacks Vuba and Igihozo chased him away."

On Friday, despite the horrific scenarios of the previous day and bleak predictions for recovery, Kirahure was still alive and gradually regaining strength.

“From looking at the videos of Kirahure from the previous day, nobody could have imagined his recovery. We were all ready for the worst scenario. Considering the recent deaths of young silverbacks, we were extremely worried,” Gorilla Program Manager Veronica Vecellio said.

Kirahure’s condition has been followed closely by our staff and veterinarians and started to show improvement the next day. In the days after, he continued to improve, although grooming by other gorillas sometimes caused more bleeding from his wound again. However, this week he has been clearly gaining strength and moving normally with his group. Staff in the field today report that Kirahure appeared much better and that they remain positive about his condition.

“Kirahure’s case will surely stay in our memories as an example of an unpredictable recovery,” Vecellio said.

Kuryama’s group was formed by a split from Beetsme’s group, which occurred in 2007 when young silverback Kuryama challenged his father, Titus, for dominance. Kuryama was the leader of his group until his early death in 2011. After that, silverback Kirahure took over leadership, supported by Vuba, Igihozo and Tetero.