Mountain gorilla female Bishushwe’s position in the Ntambara group has been unclear since she reluctantly joined it after the disbanding of the Urugamba group. This was due to the sudden death of dominant silverback Urugamba in late January. When major changes occur in group dynamics, such as the addition of new gorillas, the integration and settlement of hierarchy is extremely important to their social order and group dynamics. 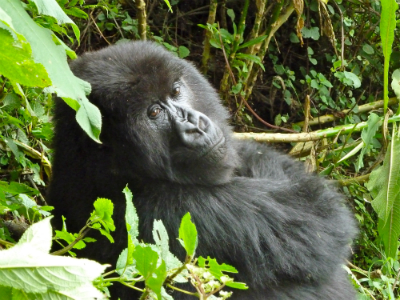 Fossey Fund field staff coordinator, John Ndayambaje, witnessed an interaction in the Ntambara group on March 26 that tried to settle Bishushwe’s place in the new hierarchy. He watched as Kunga, a young female from the original Ntambara group, instigated an act of harassment towards Bishushwe. Acts of harassment to settle status generally involve antagonistic behavior, like screaming and physical attacks.

This incident led to further divisions in the group, with the other female gorillas taking sides. Kubaka, the oldest adult female of the original Ntambara group supported Kunga. The other female transfers from the former Urugamba group supported Bishushwe in the altercation. No major injuries were sustained by either gorilla.
It was very exciting for us to observe this interaction, though the outcome of the interaction is still unclear. We are anxiously waiting and watching to see what happens with Bishushwe’s ranking in the Ntambara group, as she has already been through so much this year, with the death of Urugamba, the dissolution of his group, and the subsequent death of her infant upon joining the Ntambara group.