Mountain gorilla Taraja was observed by our trackers with a newborn on July 19. She lives in a group of mountain gorillas led by silverback Mafunzo, one of the newest groups followed daily by the Fossey Fund. Taraja is an interesting female because she has made multiple transfers from one group to another in her lifetime, moving from Titus’s group to Pablo’ group to Giraneza’s group, then back to Pablo’s group, then to Inshuti’s group, back to Giraneza’s group and now to Mafunzo’s group! 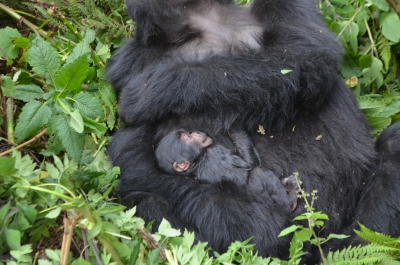 This birth is also the first in Mafunzo’s group, which formed in January 2014 and had a stressful beginning, but which now includes 10 gorillas. Taraja lost her previous two offspring due to infanticide, as a result of her frequent transfers. This is not unusual when a female with a young infant leaves the group in which the infant was fathered. The silverback in the new group will often kill the infant, so that the mother becomes available for reproduction again more quickly.

Everyone at the Fossey Fund hopes that this time things will go well for Taraja and her infant, and that she has found a more stable “home” in Mafunzo’s group.