Fossey Fund Honored as One of Rwanda's Best Taxpayers 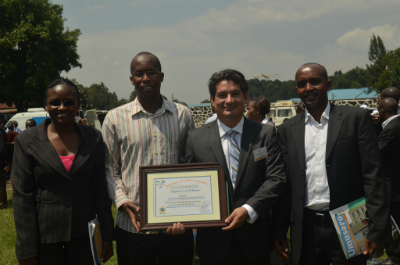 The Dian Fossey Gorilla Fund has been recognized by the Rwanda Revenue Authority (RRA) for being one of the best taxpayers in the Northern Province, where Volcanoes National Park and the Karisoke Research Center are located.

Although exempt from corporate income tax due to its non-profit status, the Fossey Fund's speed and accuracy in processing payroll taxes placed it on RRA's "best taxpayer" list along with much larger companies such as banks and national utilities. We were the only international non-profit to be so recognized. We were also recognized by the RRA in 2006. Congratulations to our administrative team!

The award was given on Sept. 1, which is National Taxpayer’s Day in Rwanda, at a special event in the Musanze stadium, attended by Rwanda’s Prime Minister, Dr. Pierre Damien Habumuremyi, and many other important Rwandan and international guests. Our Chief Operating Officer and Vice President of Africa Programs Juan Carlos Bonilla received the award on behalf of the Fossey Fund. Karisoke Research Center Director Felix Ndagijimana, Director of Finance and Administration Beth Waithera, and Finance Assistant Elias Basile Ntabashimwa were in attendance as well.

The speeches given at the event stressed that for Rwanda, bringing individuals and organizations on board as taxpayers is particularly important so that the country can acquire the funds to provide further infrastructure and services to its people. The Fossey Fund has a long history in Rwanda, not only protecting its mountain gorillas, but also supporting and implementing programs which help its people. We were honored to be recognized by the RRA as an exemplary taxpayer, in keeping with our commitment to play a positive role in the community surrounding Volcanoes National Park.
Dakota Straub, field communications intern