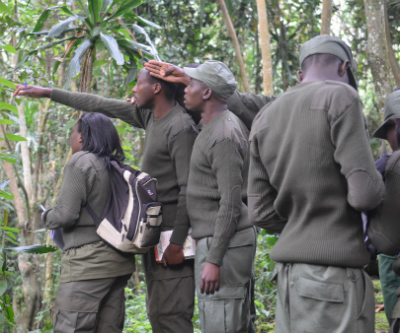 As part of the Dian Fossey Gorilla Fund’s partnership with the Rwanda Development Board (RDB), which manages Volcanoes National Park, scientists and field staff from the Fossey Fund’s Karisoke Research Center provide special workshops and field training sessions for new tourist guides who will be working in the park. This year, RDB sent 16 guides hired during the last year to participate in the six-day course.

The workshop is designed to provide the new guides with an overview of the park’s history, conservation issues and strategies, a working knowledge of gorilla and golden monkey behavior and ecology, and an understanding of the park’s biodiversity. It is also an opportunity to open a channel of communication between the guides and Fossey Fund staff, so that the guides feel comfortable approaching our staff with questions in the future and even using the Fossey Fund’s research library as a resource for their professional development.

Joseph Karama, the Fossey Fund’s Conservation Education Program manager, says, “We have thousands of visitors coming through Volcanoes National Park each year. If the guides have a thorough understanding of the park’s biodiversity and the challenges that that biodiversity is facing, including mountain gorillas and the threats they face, and if they can effectively share that understanding with the visitors, they might be in a better position to inspire the visitors to want to help protect it.”

Aside from providing the guides with information that they can convey to visitors, the Fossey Fund also used the course as a time to discuss the challenges of being a guide — including how to prevent the spread of disease between gorillas and human visitors. Together, RDB guides and Fossey Fund staff discussed the importance of keeping safe distances between gorillas and their human visitors and strategies for maintaining it.

At the end of the course, the guides gathered together to celebrate their work and to receive certificates for their participation. At the celebration, Karama, who describes this year’s group of guides as particularly engaged, told them, “This has really been a two-way experience and exchange, and I believe you will influence guiding in Volcanoes National Park.”

The guides were all happy with the training and felt more confident to provide information to their future clients. One guide said, “We appreciated this training because before we didn’t have as much to say. Now we are sure we have something correct. ” When the guides took turns describing the most helpful things they learned during the workshop, the highlights varied tremendously. Among the subjects mentioned were gorilla home range patterns, in-depth material for interpreting the original Karisoke site in the forest, differences among the gorilla species and subspecies and where they can be found, comparisons between mountain gorillas in Bwindi Impenetrable Forest and the Virunga mountain gorillas, guiding skills for improving visitors’ experiences, disease transmission between humans and gorillas, the food chain, and the concept of endemic species. 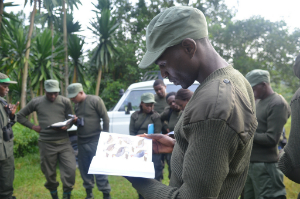 RDB guide Callixte Mugiraneza explained that one lesson he took away from the workshop was to consider that visitors to the park have different backgrounds and levels of knowledge that can influence the exchange with the guide during their visit. Guides can create a better experience for everyone by drawing on visitors’ knowledge and skills as well as their own. “When I am guiding, what I can do is to share our experiences,” Mugiraneza said. Another guide, Patrick Ken Magirirane, added that the course was not only an opportunity to learn new information, but also for the guides to spend time with and learn from one another.