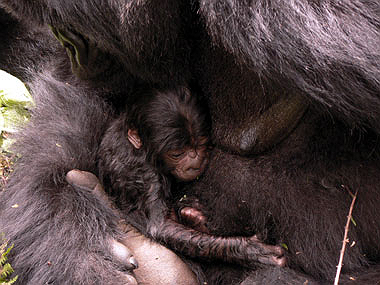 It has been a record-breaking month for the gorillas we monitor from the Karisoke Research Center. Pablo's group, one of the three groups of mountain gorillas that we monitor and protect daily, is at last reaching an astounding 60 individuals! The size of this group has amazed researchers for many years as it just keeps growing and growing, under the leadership of dominant silverback Cantsbee and his second in command, Pablo. For the last two years, the group has hovered near the 60 mark but has never quite made it, due to deaths and transfers, until now. This latest breakthrough came when 25-year-old female Ginseng gave birth to her fifth infant on April 12.

Ginseng was born on August 14, 1980 in Nunkie's group and was named by Dian Fossey. In 1985 this group split and Ginseng joined the new group led by young silverback Beetsme, where she stayed until transferring to Pablo's group in 1998. She has three living offspring, Bwenge and Inziza in Beetsme's group and Irakoze in Pablo's group, as well as this new addition. The birth of this new infant is especially welcome, since Ginseng's last baby died due to unknown causes in 2004 at only 6 weeks old. All staff at Karisoke have their fingers crossed that she will be more successful this time. 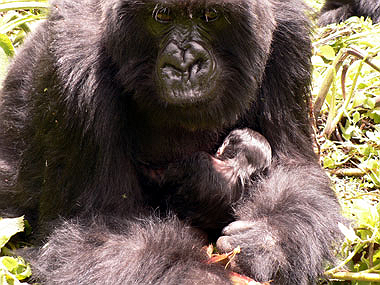 The Karisoke education program this month saw the second phase of ORTPN tourist guide training. ORTPN is the Rwandan national authority for tourism and national parks. This course, which was first run last year for half of the Virunga tourist guides, consists of training them in aspects of the park's biodiversity, primate behavior, mountain gorilla and golden monkey behavior and ecology, as well as general conservation issues.

In all, 12 ORTPN staff attended the course — six guides, four trackers and, for the first time, two tourist guides from Nyungwe National Park in southern Rwanda. Although Nyungwe forest does not contain mountain gorillas, it is famed for its high primate diversity, with 12 species in all, including chimpanzees. The fact that ORTPN wanted these extra guides to attend demonstrates the high esteem with which this course is regarded and it once again proved popular with the attendees. It is hoped that this program can be built upon with further training in bird and plant identification later in the year.