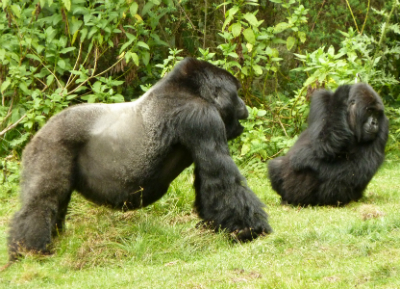 Secondly, Taraja, one of the two females in Giraneza’s group, has a new infant, who we estimate is less than a week old.

The group was seen interacting with Bwenge’s group, which is also ranging very far away at the moment, behind Bikereri Hill. The interaction had already started when Bwenge’s trackers arrived, and it went on until 11:45 a.m. After the interaction the two groups moved in opposite directions without any consequence. The interaction took the form of several displays and a few physical aggressions, none of which resulted in injury.

The newborn is the second infant born to 13-year-old female Taraja and the first for silverback Giraneza since he formed his group just over a year ago, in February 2012. Taraja gave birth to her first infant, Akarusho, in Inshuti’s group. He died last year from infanticide due to separation from his group after some snare accidents.

Field Logistics Coordinator Jean Damascene Hategekimana (known as “Fundi”) will try to locate Giraneza’s group again tomorrow to take pictures of Taraja and the new infant. It’s very rainy at the moment and the group is moving away fast, so we don’t know if he will succeed.