Kurudi, an adult mountain gorilla female in Ugenda's group, gave birth on March 25, 2010. This will be the fourth infant born this year in the gorilla groups we monitor from the Karisoke Research Center in Rwanda. 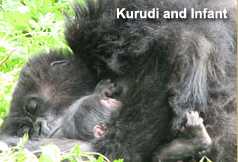 Mother Kurudi was born on April 23, named after a nearby stream called "Kurudi," in Volcanoes National Park, into a group led by the late and legendary silverback Shinda. Kurudi's mother was Walanza, born in 1969 and named by Dr. Dian Fossey. So the new infant has been born into a strong family line that has been monitored for more than 40 years! 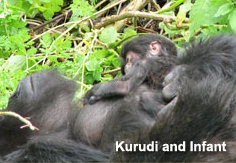 The new infant is Kurudi's second. Her first offspring, Iterambere, is now nearly 4 years old and also lives in Ugenda's group. It will be interesting to see how this older brother interacts with his new sibling. Already, the group seems very curious about their new member.

Karisoke research assistant Jean Paul Hirwa was with Ugenda's group that day and saw Kurudi with her new infant. "They were doing well and we could see the infant when the group was resting," he reported. "The other gorillas of the group, including Iterambere, Kanama, Inkumbuza and Inzizi, were curious to see an infant. During resting time, the dominant silverback, Ugenda, was positioned near Kurudi and her new infant. Ugenda didn't show any aggressive behavior towards the other gorillas when they approached or touched Kurudi."

Hirwa also observed that the infant might be a male but we still need to confirm this as during the first weeks after birth it is difficult to determine the sex.

On April 29 another birth was reported in Ugenda's group, but unfortunately the infant has died. However, on May 4 we observed yet another new infant, this time with mother Pasika, who lives in a small subgroup that had split from Ugenda's main group. We are awaiting additional details.