Dian Fossey came to Africa at the urging of famed anthropologist Louis Leakey, who was studying human evolution in Africa and hoped that studying primates in the wild would help us better understand ourselves. In 1967, Dian Fossey founded the Karisoke Research Center in Rwanda’s gorilla habitat, and indeed her groundbreaking studies of gorilla behavior became important not only for the conservation of the species but for greater scientific understanding.

Today, much of what the scientific community knows about gorillas originated from the Karisoke Research Center, which has been involved in more than 200 publications on gorillas and the surrounding biodiversity. As research at Karisoke continues to blossom and inspire, a variety of new studies are showing us more and more about gorillas, humans, and many other aspects of science.

Fossey Fund President and CEO/Chief Scientific Officer Tara Stoinski, Ph.D., along with other gorilla experts, recently co-authored a new study looking at variations in brain structure between eastern and western species of gorillas, published in the American Journal of Physical Anthropology. The researchers examined postmortem magnetic resonance images (MRIs) of brains from 18 captive western lowland gorillas, 15 wild mountain gorillas, and three Grauer’s gorillas (all of whom had died of natural causes). 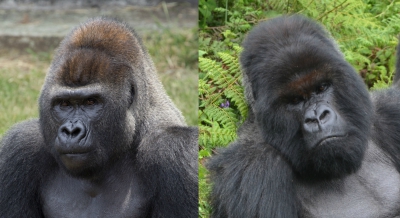 Stereologic methods were used to measure the volumes of brain structures, such as the left and right frontal lobe, temporal lobe, and many other structures, and found various differences among the species. For example, the volumes of the hippocampus and cerebellum were significantly larger in western gorillas than in the eastern gorillas.

The researchers theorize that these anatomical differences may relate to divergent ecological adaptations of the two species. Western gorillas spend more time foraging in trees, and thus may rely more on cerebellar circuits. They also tend to eat more fruit and have larger home ranges, and consequently might depend more on the spatial mapping functions of the hippocampus area of the brain, which is a part of the system that is involved in spatial memory and navigation.

The study is significant because while it is known that eastern and western gorillas are distinct in terms of behavior, morphology and ecology, this research indicates that brain structures also show species-level variation. In addition, it is also important for enhancing greater scientific understanding of how environmental factors, such as the distribution of food, influence the evolution of brain structure.