After a peaceful beginning of the year for Ugenda's gorilla group, Fossey Fund trackers witnessed an interesting interaction on Feb. 3. The excitement happened with Kuryama’s group and started as an auditory interaction. No transfers or injuries resulted, but all the gorillas were mixed together at one point and there were lots of displays! 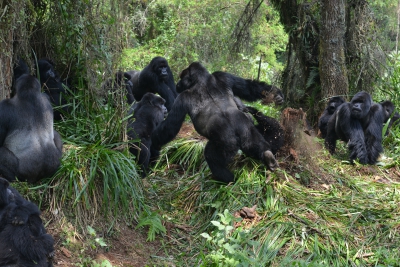 Jean Paul Hirwa, the Fossey Fund’s Gorilla Protection and Monitoring Officer at the Karisoke Research Center, recorded details about the interaction. It started when the gorillas in Ugenda's group screamed among themselves. Silverback Kirahure, in Kuryama’s group, heard these vocalizations, since his group at that time was 200 meters away.

At that point, Kuryama started displaying and began moving to face Ugenda's group. All the gorillas in his group followed him, When they reached Ugenda's group, the gorillas from both groups intermingled. There were many displays and strut stance postures by the adult males from both groups. The groups did not travel during the interaction, even though it lasted almost three hours! The interaction ended when Ugenda’s group left and moved quite far away.

Luckily, there were no injuries seen and none of the gorillas transferred between the groups.