Mourning the loss of a matriarch

It has been very cold up on the Virunga volcanoes, home to the endangered mountain gorillas. Tuck — at 38 the oldest female gorilla among those monitored by the Karisoke™ Research Center and one of the last of the gorillas studied by Dian Fossey — was already very weak and did not survive the rainy night. On the morning of September 6 she was found lying on her back, a few meters from her nest site. 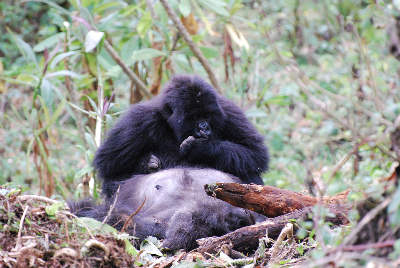 The strong bond between Tuck and other group members was highlighted by the gorillas' behavior we observed that morning. Her juvenile son Segasira, who had shared a night nest with his mother, did not take a step away from the dead body until late morning. He lay on top of her and sat on her, grooming her and resting against her. He looked at his mother’s face intently and tried to move her head, searching for some reaction. Surprisingly, he also approached her nipple, suckling for a few seconds.

The three blackbacks (young adult males) of the group also stayed close to Tuck’s body, bent over and covering their faces in the cold rain. Her older son Urwibutso displayed many times, even kicking Tuck on the abdomen, apparently hoping to elicit a response from the old female. 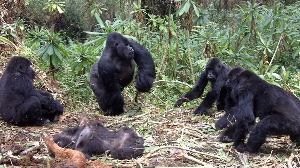 It was heartbreaking to see the gorillas surrounding Tuck with such empathy. Silverback Rano was within 100 meters, feeding together with female Umwana. The two gorillas came close to Tuck late in the morning. At that point, the entire group was gathered around her body. Rano displayed a few times, even hitting her. All around Tuck the vegetation was flattened because of the several displays.

The situation resembled the one observed a year ago upon the death of silverback Titus, who had long led the group that included Tuck, now led by Rano. On that occasion, all the gorillas stayed around the dead silverback, moving away only after two days. 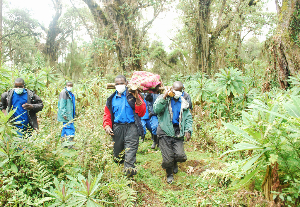 On Sept. 7, when the gorillas left the site to search for food, our staff took the opportunity to bring her body down the mountain for a necropsy (exam) to determine the cause of death.

Tuck was born in Dian Fossey’s Group 5 in 1972 to mother Effie. Her face has the distinctive traits of the Effie clan, looking very much like her older sister Puck and younger sister Poppy. Fossey’s book Gorillas in the Mist mentions Tuck extensively, noting her gentle nature, her friendship with the young male Pablo, whom she groomed after his sister Quince died, and how she shared her mother’s attentions with her two sisters.

Fossey relates: “Effie’s third daughter, Tuck, had had to forego her mother’s attention after Poppy’s birth but I seldom detected any traces of jealousy in the young female. Only on a few occasions when Puck was engrossed in grooming Effie, who in turn was intently grooming Poppy, was Tuck seen wearing a morose facial expression. This I called her ‘Woe is me, the middle sibling’ look. For the most part Tuck’s affectionate good nature overcame tendencies to brood. When she wanted to be in physical contact with her mother, she simply squiggled up against Effie’s body, even when her mother’s arms were monopolized by Poppy. If Poppy was off playing with other animals, Tuck often took advantage of the situation by making a beeline for Effie’s arms, wearing an intensely puckered face as though thinking, ‘she’s all mine at last.’”

In 1985 when she was 13 years old, Tuck gave birth to her first offspring, a male infant named Ndatwa. When the infant was 3 she transferred with him out of Group 5 to join Beetsme’s group. 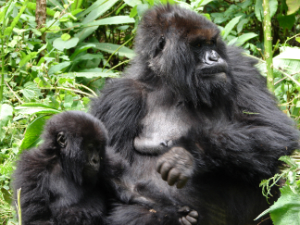 Altogether she had seven offspring, four of whom are still alive. Umuco is a successful female in Pablo’s group; Vuba is a silverback in Kuryama’s group; and the last two males, the silverback Urwibutso and 4-year-old Segasira, stayed with her in Titus’s group.

Like many gorillas of Effie’s family, Tuck easily gained the top rank among females when she transferred to Beetsme’s group. In fact, she became the favorite partner of the dominant silverback Titus. Titus and Tuck stayed together until the famous silverback died in September 2009. She had been the sole remaining female in his group. That day, Tuck left the group, followed by Segasira, clearly avoiding the newcomer silverback, Rano, who had recently returned to challenge Titus. She traveled alone, often revisiting the site where the old silverback died, and was seen nesting close to the dead body.

After a few days Tuck rejoined the group, leaving the young Segasira before going away on her own again. Segasira overcame the separation from his mother with the support of his older brother Urwibutso. However, after two weeks of exhausting traveling, Tuck decided to go back in the group, now led by Rano, and remained with them until her death.

One of the last gorillas of the Dian Fossey generation, Tuck’s passing was significant for both the gorillas and the humans who had known her.