Fossey Fund trackers observed mountain gorilla Nzeli with a newborn yesterday, bringing the number of gorillas in her group to 10. Mafunzo's group is one of the mountain gorilla groups monitored and protected every day by the Dian Fossey Gorilla Fund. Mother Nzeli is 30 years old and this is her seventh infant. 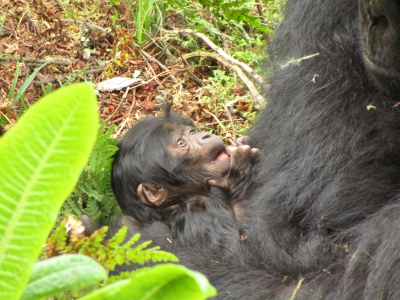 This group, led by dominant silverback Mafunzo, is not always easy to track because they sometimes range very far away in extreme terrain. Nzeli joined the group in October 2014, after losing her prior infant, who was born in September 2014 but died on the same day.

Nzeli was born in 1985 in Susa group, which is one of the groups monitored by Rwandan park authorities for tourism. She spent 10 years in that group, then 12 years in Pablo's group and seven years in Bwenge's group. But she also had short stays in several other groups and now seems to be doing well in Mafunzo's group, where the new infant was conceived.