Since September 1998 staff have been making weekly trips to the Volcanoes National Park. Facilitated by military escorts, these visits have established that the three research groups are in good health. 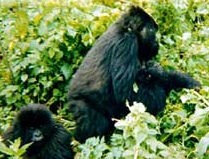 All but one of the more than 80 gorillas have been accounted for. Three babies were born during our absence from the park … and … FOUR more have been born in the last three months! Beetsme's group had been static for the past two years, but has now increased to 26 members. Pandora, estimated to be about 39 years old, has given birth to her fifth infant.

Having seven new additions, and two babies born in 1997 still unnamed, the Karisoke Christmas party became a baby-naming bonanza. It has become tradition that the staff choose names with some relevance to the timing of the birth. All names chosen in December reflect the difficult times which the staff have come through over the last 18 months. Eight names and their meanings are: 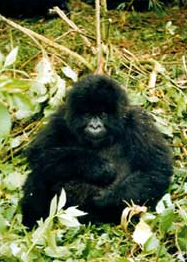 Turakora: "we are working"
Musilikale: "military" – the trackers are accompanied by military escorts in their visits to the gorillas
Kureba: "to observe" – each worker must make good observations in his work
Dufatanye: "the trackers must show solidarity" (team spirit)
Dushirehamwe: "the trackers must work together"
Kubaha: "respect" – the workers must show respect to each other and to their superiors
Twemere: "accept" – the workers should accept the advice of those in charge
Twibuke: "remember" – remember those who are in prison and those who died.
The ninth baby died in early December, the second infant of Gitebe in Pablo's group. Usually only living individuals are named, but because this little gorilla lived 18 months and died without us knowing her, we called her Agahinda, meaning "sadness."

Despite this loss, we are very reassured to find the population doing so well. The individuals who have not yet been seen may not be missing since the groups have been observed in less than optimal conditions: in the bamboo zone, and usually for less than an hour. We will need repeated visits to get opportunities to see all gorillas, especially now that Pablo's group has grown to more than 40.