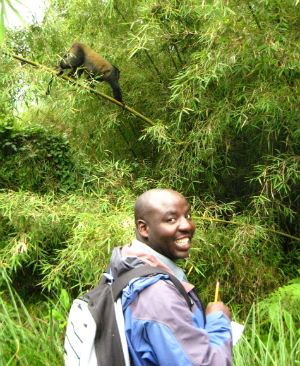 The Albertine Rift valley of central Africa, which includes the park, is home to a rich variety of small mammal species, but they have not been documented as well as the birds and butterflies of the region. In fact, the most recent comprehensive study of small mammals in Volcanoes National Park was published 80 years ago.

The Rift’s environment and people are considered among the most devastated in Africa for a variety of reasons, but in spite of this, four species of small mammals, new to science, have been found there during the past dozen years and a possible seven other new species are being studied. Tuyisingize studied small mammals in the park for his M.Sc. thesis in 2010, but found only 13 species, indicating that further research is required. A complete list of small mammals will provide a basis for improved conservation strategies and future long-term studies.

The new survey will include mammals that live in trees (arboreal), flying mammals such as bats, and burrowing (subterranean) mammals such as mole rats. A variety of trapping techniques will be used, including some indigenous to the people of the area.

Tuyisingize will work on the new survey with the Field Museum’s Adjunct Curator Julian Kerbis Peterhans, who previously surveyed part of the Ugandan side of the Virungas, and four assistants. To prepare for the project, Tuyisingize will travel to the Field Museum in Chicago for a two-month internship on museum curatorial techniques. While there he will also begin to collect previous published and unpublished data for incorporation in a comprehensive publication on small mammal species diversity in the park.

The grant will fund Tuyisingize’s Chicago stay and some of the supplies for the field research, and will send Peterhans to conduct a workshop at Karisoke on the value of small mammal research. The Dian Fossey Gorilla Fund International will provide salaries and most of the supplies and equipment for the survey.

The Field Museum’s connection to the mountain gorillas and their habitat dates back to the 1920’s, when noted collector Edmund Heller conducted a mammal survey in the Virungas. Former Field Museum taxidermist Carl Akeley became an ardent advocate for conserving the gorillas after shooting several for a museum diorama he created at New York’s Museum of Natural History. His advocacy contributed to the establishment of what later became Virunga National Park in the Congo, adjacent to Volcanoes National Park. Akeley died on Mount Mikeno in the Virungas and was buried there in 1926.