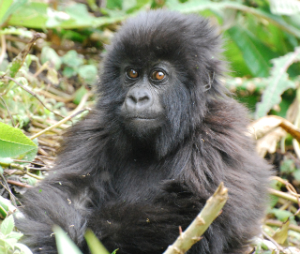 Very sad news from Ugenda's group this morning. Shyirambere, Kubyina's infant, was found dead close to the nest site where the group had spent the night. When the trackers reached the group the gorillas were still around the infant's body. In particular, the two silverbacks Ugenda and Wageni were resting within a few meters looking at him. They charged and screamed at the trackers, not allowing them to get any closer.

The trackers tried to identify the deceased infant. They saw the female Kubyina a few meters away alone, while all the infants in the group other than hers were present, so it was clear that it was hers.

When last observed the day before, Shyirambere appeared healthy. There was no evidence of an interaction near Ugenda's group, in which the infant could have been injured. A strong rain had come down all night.

Shyirambere would have turned 3 on September 11.

The trackers waited for the gorillas to move away. They were able to turn over the body at one point, and saw signs of trauma and bleeding from the mouth. The gorillas were about 200 meters away by then, so the trackers expected they would soon be able to recover the body and deliver it for examination by veterinarians from the Mountain Gorilla Veterinary Project.