On Monday, Oct. 10, Dian Fossey Gorilla Fund trackers reported that silverback Cantsbee was not in his group when they arrived for daily monitoring. Since he is elderly and the group has been traveling a lot, it was possible that he had been left behind, so on Tuesday our trackers spent the day looking for him or for his traces, but nothing was found. Several teams are now conducting extensive and wider searches every day since then but have not found evidence of his whereabouts or condition.

However, this week our trackers report that his group had begun to subgroup, and that some of the adults were not being seen with the group at various times. Staff feels this clearly reflects their reaction to Cantsbee’s disappearance.

At almost 38 years old, which is beyond the average life expectancy for mountain gorillas, Cantsbee is the last of the silverbacks originally observed by Dian Fossey and also holds the record for the longest reign of dominance, taking over his group from the late silverback Pablo in 1995. His group is still called Pablo’s group today, but for the past year has been largely led by his son, Gicurasi.

“The disappearance of Cantsbee will have a big impact on Pablo’s group and consequently on the organization of all activities at our Karisoke Research Center,” says the Fossey Fund’s Rwanda director Felix Ndagijimana. 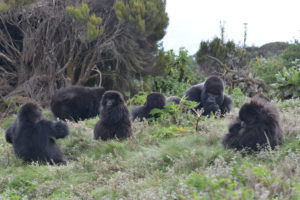 “We expect to see sub-grouping in the group as a response to new leadership. Our current teams are on standby to follow and monitor any new group or sub-group that will be formed, and in the long-term we may need to hire new field staff to be able to fully handle coverage of all the gorilla groups we monitor and protect.”

“We are very disappointed that we have not found Cantsbee yet, despite the massive searching effort. He is so legendary and charismatic, so we really want to know what has happened to him,” adds Veronica Vecellio, gorilla program manager at the Fossey Fund’s Karisoke Research Center in Rwanda. “It is so hard on our team any time a gorilla is lost but Cantsbee is such a legend within Karisoke, it is really heartbreaking to not know where he is and if he is OK.”

After being followed since birth by Dian Fossey and succeeding staff of the Fossey Fund, stories about Cantsbee and his group are many. Along with being a strong leader for so many years, Cantsbee is known to many as an active and responsible father, siring more than 30 offspring over the years. Even the way he got his name is legendary and happened when Dian Fossey observed his birth, to a gorilla she had previously thought was a male! She said “It can’t be” and the name turned into Cantsbee.

“One of my favorite stories about Cantsbee was one told to me by a research assistant,” says Fossey Fund President & CEO/Chief Scientific Officer Tara Stoinski, Ph.D. “One day, Cantsbee was being uncharacteristically aggressive and grunting at every infant gorilla who approached him. After the infants had avoided him and move away, he finally got up and left. The assistant was able to see he was sitting next to a snare, and her impression was that he was protecting the infants from it,” Stoinski says.

The Fossey Fund is adding extra teams and working with national park management to continue searching for Cantsbee and monitoring the members of his group and subgroups. When an important silverback is lost, there are always many changes to observe and study.“As expected we are observing changes in Pablo’s group, starting with the emigration of two young silverbacks who were previously supported by Cantsbee, as well as this subgrouping,” says Winnie Eckardt, Ph.D., research manager at Karisoke. “We hope that some silverbacks remain with Gicurasi to form a strong team in protecting Pablo’s group from threats, such as attacks from lone silverbacks and interactions with neighboring groups.”

The Fossey Fund has nearly 50 years of studying gorillas, and learning about how they respond to such significant changes in their lives is a key factor in our work. We will continue to closely monitor and report on any changes in the group’s dynamics. Staff hopes that silverback Gicurasi will be able to keep the group together, but only time will tell if he has the same charisma as his legendary father, Cantsbee.