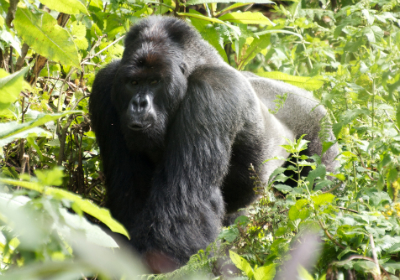 Tuyizere, a 17-year-old lone silverback that has not been seen since February of this year, made a dramatic appearance on Cundura hill today. Bwenge's and Isabukuru's group were ranging close by at the top of the hill (but never made visual contact), with Fossey Fund researcher Stacy Rosebaum, Ph.D. and trackers in tow. Rosenbaum reported that chest beats and display vocalizations simultaneously erupted from all around at 8 a.m. Titus's group was just down the hill and had come into contact with the lone silverback. Rano, the dominant male of Titus's group, faced Tuyizere, keeping a 50-100 meter distance as they displayed towards one another on either side of the valley. The gorillas of Bwenge's and Isabukuru's group joined in on the display vocalizations and cacophony ensued. The interaction itself lasted approximately an hour and a half, but the display vocalizations and chest beats continued on for over four hours.