Looking Back at the Life of Silverback Bwenge 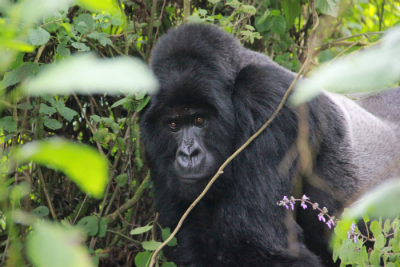 Until recently, dominant silverback Bwenge had been successfully leading a group composed of two females, including elder Maggie, and five youngsters ranging in age from 3-6 years old. He was the only adult male in the group, and unfortunately a number of recent interactions left him wounded. Although he was thought to be recovering, he was found dead by trackers of the Dian Fossey Gorilla Fund on Oct. 1. Bwenge’s group is one of the mountain gorilla groups followed daily by the Fossey Fund.

On Sept. 21, Fossey Fund trackers had found an interaction site on the trail of the group. The site was marked by blood on the ground, hairs and flattened vegetation all around, so a confrontation between two groups had clearly happened that same morning. When the group was located later that day, silverback Bwenge wasn’t with them and the females and youngsters were under visible stress. About 50 meters away, a solitary silverback was seen following them. The group, then led by elder female Maggie, kept moving quickly for the entire morning, with the lone silverback continuing to follow.

On the following day Bwenge was found back with his group, but appeared to be in pain due to significant injuries on his arms and legs. The solitary male, Turatsinze, who is well known and was originally a member of Pablo’s group, was seen behind Bwenge’s group for three more days and is believed to have caused this interaction as well another intense interaction on Sept. 24.

Bwenge, born on March 22, 1990, was the son of legendary silverback Titus (former leader of Beetsme's group) and Ginseng. Bwenge grew up in Beetsme’s group for the first 16 years of his life, until he split to form his own group on Jan. 3, 2007. By doing so, Bwenge became the first of a new generation of males to break with the three long-established mountain gorilla group leaders: Titus, Cantsbee, and Shinda.

Bwenge was followed by two females, and that was the beginning of his successful story as a dominant silverback. The group grew in size rapidly, and after just three weeks females from Pablo’s group joined him. Among those was the elder Maggie, 34, who remained loyal to Bwenge’s group to this day.

For many years the group had a calm routine. Bwenge demonstrated excellent paternal skills, especially when he took care of two infants (now subadults), Ntaribi and Akaramata, who were orphaned at a young age after the deaths of their mothers. With them, Bwenge formed the strongest bond among all his loyal group members. 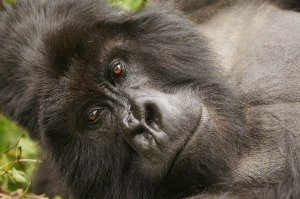 Bwenge’s was a single-silverback group, and it is always uncertain how such a group will cope with the loss of their leader. The Fossey Fund will be closely monitoring how they adapt. Initially, elder female Maggie was leading the group, but then they encountered members of another group (Ugenda's) and appeared to be in the process of merging. This is an ongoing situation that may be subject to frequent changes, so stay tuned to our Gorilla Blog for the latest updates. Click here for the Gorilla Blog.

Generous contributions from Oracle, the U.S. Fish and Wildlife Service, and Nature’s Path help us continue our mission of helping people and saving gorillas. Their financial support allows us to continue the daily monitoring and protection that have been crucial to the survival of gorillas and their habitat, and support our ongoing research and community education programs which raise awareness about these endangered primates.