Mountain Gorilla Tourism: The Costs and the Benefits

(The following is based on a chapter by Liz Williamson and Andrew Plumptre "Mountain Gorilla: Three Decades of Research at Karisoke", soon to be published by Cambridge University Press.)

In 1979 when plans were announced to clear another 52 square kilometers for cattle grazing, conversion of their forest habitat was considered the greatest threat to the gorillas' survival. A means of making the gorillas "pay for themselves" and protecting the park was needed, and thus a tourism program was planned and developed. Researchers with experience gained from Karisoke Research Center initiated the tourism program in Rwanda. Gorilla tourism has since become a great success in terms of revenue for Rwanda, increased protection of the park, and close surveillance of additional gorilla groups.

Revenue from gorilla tourism helps cover salaries and operating costs in the protected areas of Rwanda — the Volcanoes National Park, Akagera National Park and the Nyungwe Forest Reserve. In addition, the international publicity surrounding the gorillas and the advent of organized tourism has brought many visitors to Rwanda and made tourism the third-highest foreign currency earner for this country, after tea and coffee, at nearly $1 million per annum.

At the same time, daily observations of the gorillas has facilitated rapid intervention when necessary, for example, to remove snares. With increased protection from poachers, more infants per adult female have been recorded in groups that were habituated for research or tourism. By 1986 the population was seen to be increasing for the first time in three decades.

International awareness and concern for the plight of gorillas has also been enhanced through tourism and has generated funds for conservation activities and research. The gorilla has become a national symbol and today the Rwandese passport, visas for foreigners, and bank notes all feature gorillas.

Some dangers linked to tourism

However, tourism does have its drawbacks. Even before tourism began, impacts of human visits on the gorillas' behavior were feared, such as changes in their ranging patterns, impeding the transfer of females to other groups, and hindering reproduction. Stress to the animals can be provoked during the habituation process or through regular contact with unfamiliar humans, which could potentially result in immunosuppression or reduction in reproductive success. These impacts have never been adequately evaluated. Luckily, extrapolation from research on population demographics carried out at Karisoke Research Center, indicates that tourism has not been deleterious to the gorillas' overall health, behavior and ecology. Any negative impacts seem to have been outweighed by the improved monitoring and protection.

Until recently, we relied on speculation, extrapolation, and common sense to evaluate the risks of disease transmission from humans to gorillas. Tourism introduced a new element to these risks. A study by Dr. Jaco Homsy commissioned by the International Gorilla Conservation reviewed tourism regulations in light of epidemiological data and the risk of disease transmission between people and gorillas. Studies of captive gorillas show they have a definite susceptibility to human diseases, but not the same resistance as humans. As a result of this shared susceptibility, certain human pathogens can affect gorillas — respiratory diseases (such as measles, herpes, pneumonia) and, equally important, enteric diseases (such as polio, salmonella). Homsy concluded that: "together with the high population pressure surrounding the parks, disease exposure ironically makes tourism one of the single greatest threats to mountain gorilla survival" and that "the best hope for a least damaging tourism program resides in the widespread sensitization, awareness and understanding of the catastrophic consequences of unconscious gorilla tourism."

With such a small population of gorillas in the Virungas, an infectious disease could devastate the population, and gorilla eco-tourism has increased the potential threat of disease transmission. While most of the international tourists visiting Rwanda are fairly fit, having been inoculated against certain diseases, they may be carrying viruses new to the region, such as influenza. These illnesses, to which the gorillas have never been exposed, are potentially the most dangerous. While this was recognized as a risk at the start of the tourism program, the loss of habitat was considered a far greater threat to the gorillas at the time and the tourism program was implemented with rules to regulate tourist visiting times and the number of tourists per group.

It is important to minimize stress and risks to the gorillas — no one can afford to endanger their survival. Consequently, there are also very important rules regarding the distance to be maintained between gorillas and visitors, the number of visitors per group and a strict one-hour limit to the visit. A conscientious tourist should never attempt to get closer than the regulation 7 meters, or worse still to touch a gorilla!

Despite the dangers inherent in tourism, it provides a mechanism for ensuring that the parks and the gorillas are valued for many reasons, and has probably saved the gorillas in the Virunga Volcanoes from further habitat loss or degradation.

Gorilla viewing fees — Why so high?

The high cost of a gorilla viewing permit is often questioned. It is currently set at $250, but most visitors will tell you it was worth every buck! There is a very important reason for keeping the price high — it is a necessary means to try to control the high pressures put upon the gorillas and the park authorities. The gorillas are pretty much at their limit in terms of the number of people who can visit them each day, and at certain times of year it is hard to get a booking. 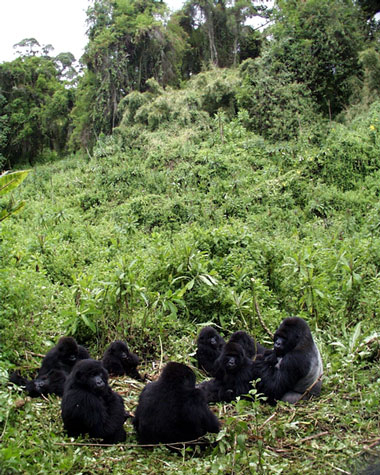 One way to cope with tourist demand and to assure parks and governments of adequate revenue is to increase the cost of a visit to gorillas. At $250, gorilla viewing is affordable to almost all overseas visitors, and few people are discouraged by the price. The mountain gorilla population is too small and too fragile to withstand increased pressure from tourism. With a fee in this range, the numbers of visitors does not diminish, but some of the pressure subsides, while the revenue accrued by each governing authority increases. It should never be forgotten that the tourism program was begun first and foremost as a means of conserving the gorillas.

Homsy, J. (1999) Ape Tourism and Human Diseases: How Close Should We Get? Report to the International Gorilla Conservation Program, 79 pp.