This is the second in a series of articles, presented by the Fossey Fund’s Gorilla Program Senior Advisor Veronica Vecellio, highlighting the main mountain gorilla groups the Fossey Fund protects and studies every day in Rwanda. No two groups are alike – they vary in size, the quality of relationships between individuals, their location in the forest, and the personalities of individual gorillas as well as of the group overall. Some groups have been in existence for many years while others are much newer. We are excited to share Veronica’s amazing knowledge of these families from her nearly 20 years of working with them.

“Like father like son” is an apt phrase to use in describing the mountain gorilla group led by majestic silverback Musilikale, who is the son of the legendary silverback Cantsbee. 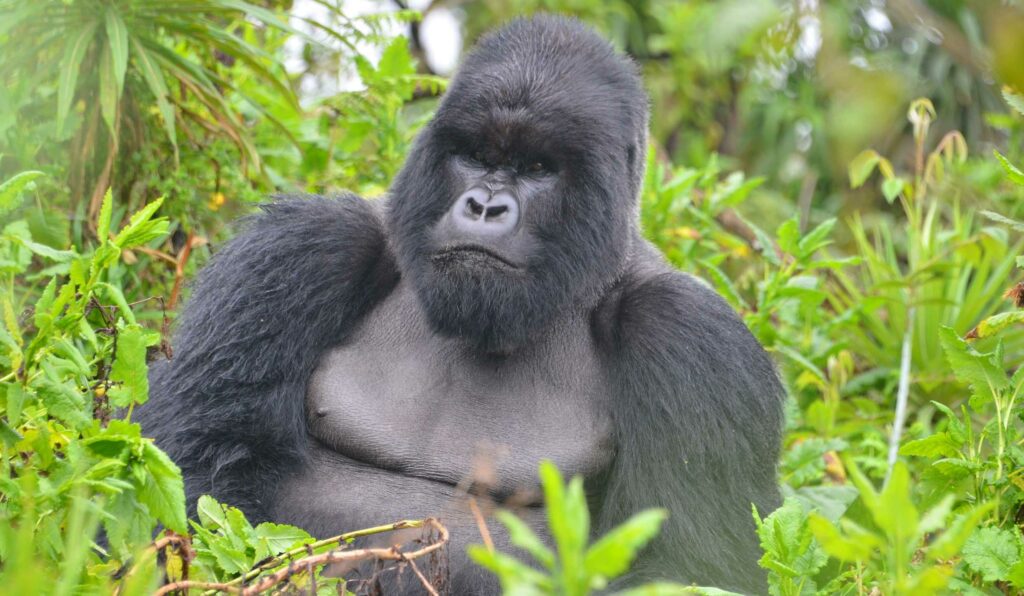 Like his father Cantsbee, who held leadership of Pablo’s group for more than 20 years, Musilikale leads a large group – currently composed of 24 gorillas. The group formed in 2013, when Musilikale split from Pablo’s group. At that time it included three silverbacks, one blackback (younger male), a dominant female and three of her sons.

That female died in 2018 but her sons, who are now 21, 18 and 11 years old, have strengthened their bond and together play a key role in keeping the group well protected.

Another interesting fact about Musilikale’s group is their ongoing alliance with Pablo’s group. The two groups are never very far apart and if they have an interaction, it always ends peacefully. We believe that their proximity is strategic, and helps them maximize the safety of both groups.

Musilikale has a unique personality. Even though genetically he is the son of Cantsbee, we see in him the influence of secondary silverback Pablo, who also helped lead the group, even after losing dominance to Cantsbee. Sometimes the group would subgroup into two parts, each with their faithful followers and young Musilikale was always in the Pablo section.

Unlike the more peaceful Cantsbee, Pablo was known for his temper and for facing conflicts like a warrior, always on the front lines. This was very helpful for the group’s protection and Musilikale seems to follow that model. Our trackers are well aware of his temper and always stay on alert when tracking this group, in case he decides to charge.

It is interesting to note that the males of Musilikale’s group are all very large. It’s impressive to see them cooperating when confronted by other groups or by solitary silverbacks. No one wants to challenge them and if they do try, the conflict won’t last long. As an example, see this recent video below where Musilikale’s group is interacting with another large group, called Susa.

Fossey Fund gorilla program senior officer Eric Ndayishimiye witnessed the scene and reported that although the situation was very tense, the powerful displays from the Musilikale silverbacks meant it didn’t take long for Susa’s group to decide to withdraw.

In the video, Musilikale is holding some leaves in his mouth. This is called symbolic feeding and it’s one type of display used by male gorilla males to show their strength, as are the stiffened postures they exhibit.

The effect of large males on group success was the focus of one of our scientific studies, which showed that male gorilla size matters – larger males are more successful, as measured by how many offspring they have, which also correlates to their dominance ranking and number of mating partners. This makes sense considering the role that the males play as protectors of the family. Large size certainly helps intimidate intruders and mitigates potential dangers, and this is attractive to the females.

More than eight females of varying ages have transferred into Musilikale’s group over the years, which is a high rate relative to normal gorilla group dynamics. And these females have now produced 12 offspring!

As such, Musilikale’s group does a great job contributing to the overall mountain gorilla population growth, since two to three infants are born in this group each year. We look forward to seeing the continued success of this important group!