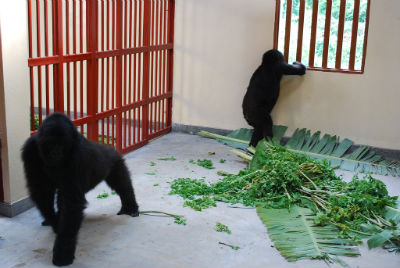 Maisha and Kaboko, the two orphaned mountain gorillas who lived in a temporary quarantine facility in Kinigi, Rwanda for several years, were successfully transferred yesterday to their new home at Rumangabo in Virunga National Park, Democratic Republic of Congo (DRC).

“After all these years of caring for Maisha and Kaboko, we are both sad to part with them and glad that they have now gone to a purpose-built facility to start their journey towards reintroduction into the wild,” said Katie Fawcett, director of the Dian Fossey Gorilla Fund International’s Karisoke™ Research Center. 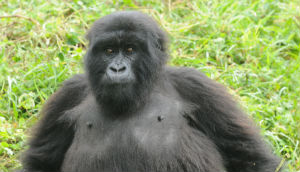 Nine-year-old female Maisha (whose name means “life”) and 6-year-old male Kaboko (meaning “the one missing an arm”) were rescued from poachers by Rwandan authorities in 2004 and 2007 respectively, but were originally poached across the border, in the DRC. Due to insecurity in eastern Congo in those times, they were cared for in Rwanda, alongside six confiscated Grauer’s gorillas. An agreement between the two countries stipulated that Maisha and Kaboko would be relocated to the DRC once an appropriate facility became available. 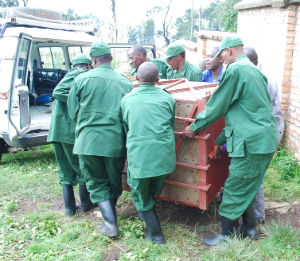 Yesterday, it was time for them to return home. After being sedated and receiving a last-minute physical checkup in the morning, Maisha and Kaboko were each put inside a crate and carried onto separate trucks. Five hours later, which they spent under the close supervision of veterinarians and caregivers, the two gorillas arrived safely at the brand-new facility and were released directly into the night house. They were both upbeat and immediately started to explore their new environment. Their first night was peaceful, with no incidents reported.

The transfer was carried out in accordance with the Confiscated Gorilla Scientific Technical Steering Committee, with representatives from the national park authorities of Rwanda (the Rwanda Development Board, RDB); the DRC (L'Institut Congolais pour la Conservation de la Nature, ICCN) and the Uganda Wildlife Authority, as well as the Transboundary Secretariat and partner NGOs, including the Mountain Gorilla Veterinary Project (MGVP), the Fossey Fund, and the International Gorilla Conservation Program. 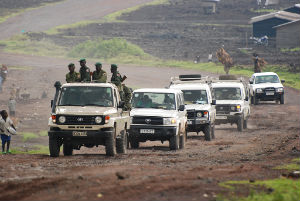 “The relocation is not only a timely initiative, but also a reflection of an efficient and effective regional collaboration, as we strive to overcome various challenges to successful conservation,” said Rica Rwigamba, the head of Tourism and Conservation at RDB. “This will in the long run see the mountain gorillas scrapped off the endangered species list,” she added.

An official from ICCN, Joel Wengamulay, also praised the successful operation: “It is wonderful to have Maisha and Kaboko return to Congo, as a result of a solid joint effort.”

At Rumangabo, the confiscated gorilla facility bears the name “Senkwekwe,” after the famous silverback killed in the Virunga massacre of July 2007. There, Maisha and Kaboko will enjoy a large forested enclosure, where they will develop the skills needed for life in the wild, as the ultimate goal is to have them released. 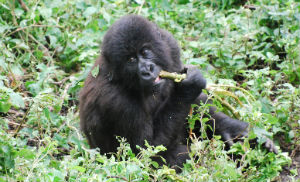 For now, they are accompanied every moment by two of their familiar Rwandan caregivers, who will spend up to three months with them to help make the transition as smooth as possible. After four weeks of quarantine, Maisha and Kaboko will gradually be introduced to Ndeze and Ndakasi, the two much younger confiscated mountain gorillas who have lived at Senkwekwe for almost a year now, and who currently sleep in a smaller night house and spend their days in another forested enclosure nearby.

Back in Kinigi, the Grauer’s gorillas spent a relatively quiet day following Maisha’s and Kaboko’s departure. The Fossey Fund, in collaboration with MGVP, will continue to care for those gorillas before they too are transferred to the DRC, to the state-of-the-art Gorilla Rehabilitation and Conservation Education (GRACE) center founded by the Fossey Fund in Kasugho, DRC, in early 2011.