Ntambara's mountain gorilla group has just received a new addition to their family. Tegereza, a female who is nearly 13 years old, just gave birth to her first infant. Fossey Fund trackers saw the infant for the first time on Oct. 14 and both Tegereza and her infant appeared to be in good health. 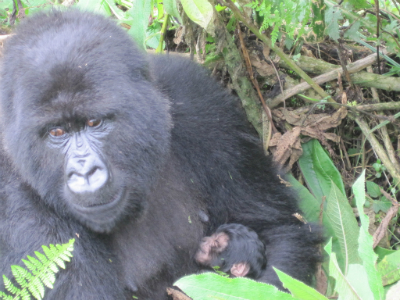 Until the birth of her infant, Tegereza was a "nulliparous female," meaning a sexually mature female who has not yet given birth. Her first birth is on the later end of the spectrum, with some gorillas giving birth as early as 7.9 years old. New mothers can be fun and sweet to watch as they navigate the delicacy and needs of their infants. Some seem immediately adept, while others struggle a bit to get the hang of it. It will be interesting to see how Tegereza takes on this new challenge. As always, we will be monitoring both the mother and infant closely in these first weeks.

This latest infant brings Ntambara's group up to 12 gorillas. There is just one other infant in the group currently, Kubaka's infant female, Urahirwa, who is about 2.5 years old. Umuganda, Nahimana's son, just turned 3.5 years old, making him a juvenile.

We are happy to see Ntambara's group grow, and look forward to watching the development of Tegereza's infant.