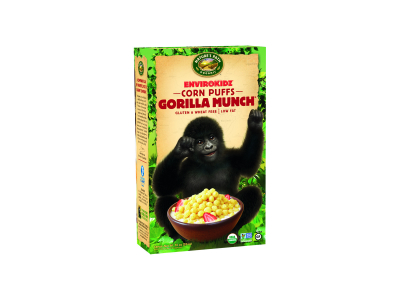 Nature’s Path EnviroKidz Gorilla Munch cereal has a new look! If you’ve seen or purchased this organic gluten-free cereal in a grocery store, you are familiar with the smiling silverback looking out over a bowl of cereal and strawberries. Now, on the new packaging you’ll see a young gorilla sitting behind the cereal bowl, raising his arms in delight. While the new illustration catches your eye, the important change is in the updated information, games and resources on the rest of the box – both inside and out. The information includes facts about gorillas and the Dian Fossey Gorilla Fund International; ways to help; and a gorilla adoption promotion. EnviroKids has also paid special attention to making the new box easy for children to read. Fossey Fund staff were pleased to help write both the original text and the updated version.

Nature’s Path, an environmentally friendly organic cereal manufacturer, produces the EnviroKidz line of cereals geared to children. One percent of the sales of each box of EnviroKidz cereal benefits non-profit organizations that support endangered species and habitat conservation and environmental education for children. All the boxes display educational copy as well as games and jokes related to the featured animal.

The independently run company was founded in Vancouver, Canada by the Stephens family, who are committed to supporting a sustainable environment through their business. Leaders in their field, the Stephens family opened the first certified organic cereal manufacturing facility in North America. Nature’s Path now sells its products in more than 42 countries.

“We have been working with the Dian Fossey Gorilla Fund for over 10 years, and we are inspired by what they have been able to do for the endangered mountain gorillas of Africa,” says Nature’s Path’s Sustainability Manager Jayson Boyce. “Our funds have supported research and education in Africa that directly benefits both gorillas and humans, and we are proud to be partners with the Fossey Fund.”

Nature’s Path has supported the Dian Fossey Gorilla Fund International since 2001. They began by giving a small gift and featuring the Fund’s gorilla adoption program on the Gorilla Munch box, which raised almost $100,000 by 2010. Their contributions grew over the years to include a Giving Back Award in 2009 which supported conservation education in schools near Volcanoes National Park; internships at the Fossey Fund’s Karisoke Research Center for biology students from the National University of Rwanda; and programs at the community-based Tayna Center for Conservation Biology (TCCB) in the Democratic Republic of Congo. They have also supported the expansion of a Disney Company-designed conservation education program which the Fossey Fund offers to primary schools near the park; the revival of environment clubs at secondary schools near the park; and the Fossey Fund’s annual hosting of a gorilla trek for local community leaders, which has led to community members becoming actively involved in helping to protect the park.

In 2011, Nature’s Path selected the Fossey Fund as one of a small group of organizations that would receive at least $20,000 per year for three years for special projects without having to compete for the grant each year, which has made planning easier. During the past couple of years, Nature’s Path’s support has made it possible for the environment clubs' programs to expand to include:

“Nature’s Path has set a great example of a responsible corporate citizen through their long-term commitment to saving endangered species, especially through conservation education,” says Fossey Fund President and CEO Clare Richardson. “We hope the new box with its engaging design and text will inspire a new generation to support gorilla conservation.”