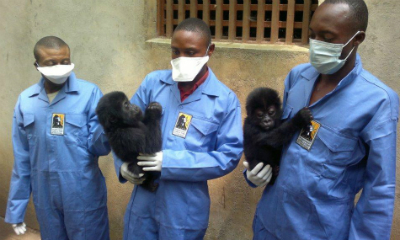 The two Grauer’s gorilla infants who were confiscated in September in the Democratic Republic of Congo continue to improve under the care of Fossey Fund caregivers and Mountain Gorilla Veterinary Project (MGVP) veterinarians at the Senkwekwe Sanctuary.

They have received names, and we are pleased to introduce them as Isangi and Baraka. Isangi, the first orphan to be confiscated, is named after the village where she was located before her rescue. Baraka, meaning “blessing,” is the second and younger confiscated infant.

One of the major challenges that we face in this early stage of the care and rehabilitation process is to ensure that the infants are in good health after the trauma of their capture by poachers, as well as to make sure that they are free of and vaccinated against any diseases that could be spread to other gorillas.

As part of the medical assessment and rehabilitation process, both infants will receive three major examinations, during which they will be vaccinated and tested for TB. They received their first set of vaccinations on Sept. 26. The veterinarians have not reported any major medical problems, which is quite a relief. Their next two examinations are planned for Oct. 24 and Nov. 21. 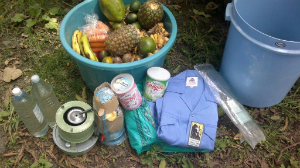 Baraka and Isangi are being housed together during the quarantine period and are bonding well with their caregivers. Provided that the infants remain in good health, after their third examination they will be ready to travel to the Gorilla Rehabilitation and Conservation Education (GRACE) center for confiscated Grauer’s gorillas, where they will be carefully introduced to other Grauer’s gorilla orphans.