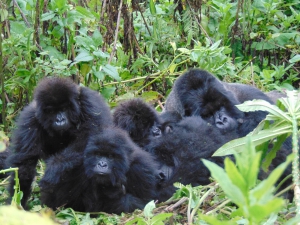 The remaining members of Ugenda's group had been led for some time by female Ukuri, and Mafunzo clearly has a strong interest in her. Karisoke Research Manager Winnie Eckardt, Ph.D., reports today that Mafunzo groomed Ukuri excessively but also displayed at her a number of times, though not violently. Ukuri seems to like being groomed by Mafunzo during rest, but also tends to wander off during feeding times. It appears that Mafunzo wants her to stay closer, which may be the cause of his displays.

We will continue to monitor the behaviors of this "new" group closely, since it will be very interesting to see how the females of the group adjust their hierarchy as the new members become integrated.