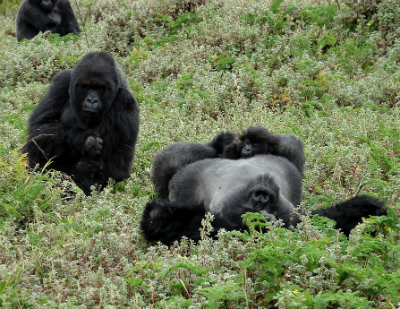 This morning Fossey Fund trackers could not reach Pablo’s group, due to the difficult terrain in their area and bad weather. They found just a small part of the group, only seven gorillas, led by young (15-year-old) silverback Musilikale.

The gorillas with Musilikale were the older dominant female Mahane (28) with her offspring: Itorero (1), Icumbi (9) and Turakomeje (12). Musilikale is known to be close to Mahane and plays often with Itorero. With them were also the sub-adult female Akamaro and blackback Noheli.

We don’t know if the group split was intentionally done or just a temporary separation because of the difficult vegetation in the area. The main group was not found, so we weren’t able to estimate the distance between the parties. Interestingly, the trackers noticed that the small subgroup was moving in the opposite direction from the trail of the original group.

Young silverback Musilikale is one of the candidates among the six silverbacks in Pablo’s group who have been trying since last year to move up in rank, taking advantage of dominant Cantbee’s old age. In fact, this is the third time that he has split from the main group, followed by a few other members. Tomorrow we will see whether he rejoins the group.

Meanwhile, Gushimira’s newly formed group seems to have disappeared. Despite a huge effort made by the Fossey Fund gorilla program staff with the support of the anti-poaching teams and the Rwandan Development Board, the group has not been seen since March 24. We will continue the search. We are positive we can find the group, we just hope to do it soon.

Older female Umusatsi (28 years old) has also disappeared again. Considering her habit of leaving the group for many days in the past, we were initially not concerned. Now we are, as she has been missing since March 17 and she is also relatively old. We hope to find Gushimira’s group soon so we can then concentrate all our efforts to look for Umusatsi. The longest period that she spent traveling alone in the past was 21 days. Her juvenile son Rwema has stayed with the group and is apparently fine. 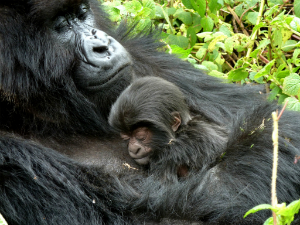 Finally, we are beginning to be concerned for female Muntu’s recently born infant, especially considering the premature deaths of her previous offspring. She did not develop a full breast, as is normal for a lactating female. The infant is suckling and not complaining (meaning he is not crying), so we hope he is getting something. The Gorilla Doctors who observed Muntu yesterday confirmed the concerns that her milk production may not be sufficient. On the other hand, both Muntu and the infant appear to be healthy and beautiful. We will keep an eye on them.