In honor of the 50th anniversary of Dian Fossey’s work, the Dian Fossey Gorilla Fund worked closely with National Geographic over the past year to create the three-part series “Dian Fossey: Secrets in the Mist.” This included extended filming with our staff in Rwanda and the gorilla groups we monitor today, as well as delving into Fossey’s historical photos and journals. And, our honorary chair, Sigourney Weaver, also played a big role, by voicing excerpts from Fossey’s writings.

Dian Fossey: Secrets in the Mist is now available for purchase and streaming online at Amazon.com.

Get involved with the Fossey Fund

PBS News Hour – “Dian Fossey and Jane Goodall changed how we saw primates. These new movies change how we see them”

Star Talk – “No One Loved Gorillas More: Dian Fossey’s Life, Tragic Death, and Her Unparalleled Love of Gorillas in Nat Geo’s “Secrets in the Mist” 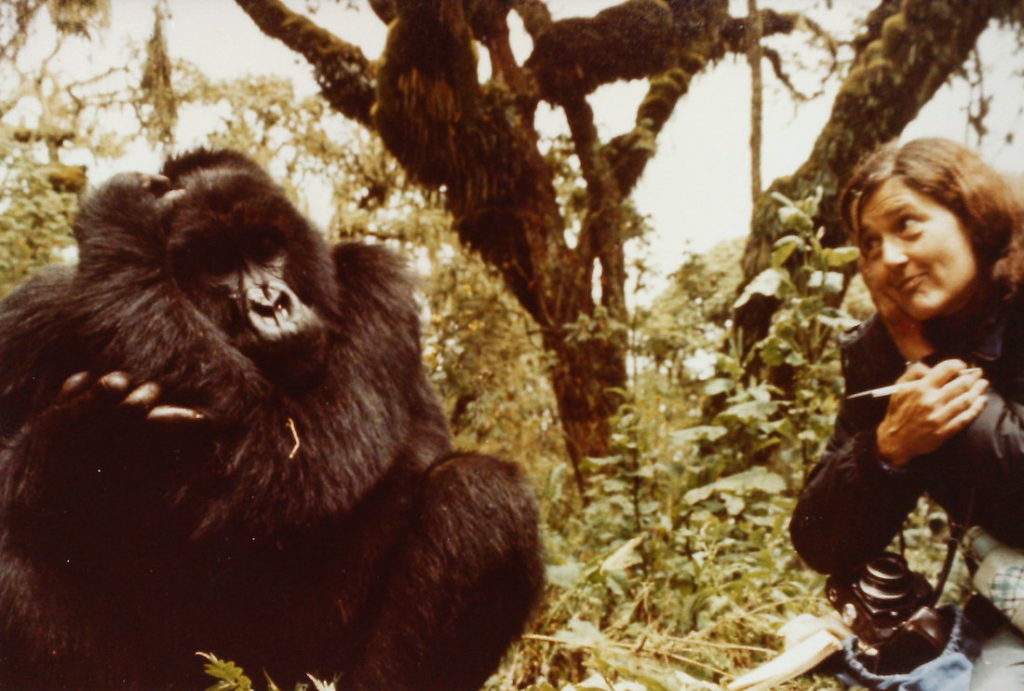 Named as one of Time Magazine’s 15 most influential animals, Digit was Dian’s favorite mountain gorilla, and they shared a special bond. In 1977, Digit was brutally murdered by poachers – a story made famous by the film “Gorillas in the Mist.” Dian often referred to him as her “beloved Digit,” and it is in his memory that she founded the Digit Fund for gorilla protection. After her own murder in 1985, Dian was buried in the forest next to her favorite great ape and their legacy lives on through our work today.

-At the time Dian began her work, she felt that mountain gorillas would be extinct by the end of the century.

-The Fossey Fund’s collection of data on gorillas, which was started by Dian, remains the largest and oldest of its kind in the world.

-We share approximately 98 percent of our DNA with gorillas.

-There are two species and four subspecies of gorilla.  All types of gorillas are critically endangered, which means they have an extremely high risk of extinction.

-The Fossey Fund studies and protects eastern gorillas, which include mountain gorillas of Rwanda (those Dian studied) and Grauer’s gorillas of the Democratic Republic of Congo.

-There are fewer than 4,000 Grauer’s gorillas estimated to be remaining. Found only in the Democratic Republic of Congo, they are the only African great ape on the list of the world’s 25 most-endangered primates. It is estimated that more than 80 percent of this population has died off in the last two decades.

-The Fossey Fund is dedicated to the conservation, protection, and study of gorillas and their habitats in Africa. Our successful, integrated approach includes close collaboration with local communities as well as partners from around the world.

-Gorillas in both Rwanda and Congo still face a variety of daily threats, including: armed conflict, lack of space which increases the risk of violent interactions, disease, illegal poaching, and habitat loss caused by climate change and human demand for farmland, minerals, and charcoal.

-Our tagline is “Helping People. Saving Gorillas” because we know that conservation cannot be done in isolation. That’s why the Fossey Fund works in four areas to build upon Dian’s intense, integrated model of conservation: