Nick Faust was elected chair of the Fossey Fund’s Board of Trustees at its meeting this March, succeeding another veteran supporter, Terry Harps. Faust is a Principal Research Scientist at the Georgia Institute of Technology and Resident Scholar of the Georgia Tech Center for Geographic Information Systems (CGIS). 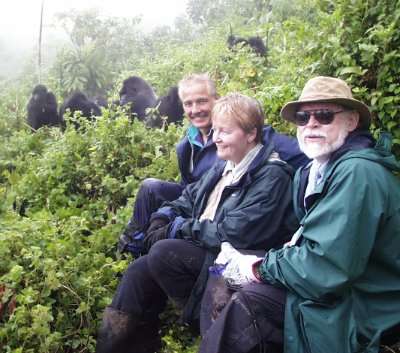 “I am very happy that Nick has accepted the chairmanship,” says Fossey Fund CEO and President Clare Richardson. “He is so dedicated and has contributed so much expertise and energy already over the years, beginning in 2000 when he brought his significant GIS and Remote Sensing expertise to help us with our gorilla habitat analysis. I am sure he can help us meet the challenges that lie ahead as we expand our work in the Congo and upgrade our research center in Rwanda.”

Faust’s involvement with the Fund has been long and multi-faceted, beginning with his key role in the late 1990s, when he began helping Karisoke scientists to apply GIS technology to satellite data in order to upgrade their maps of vegetation in the Virunga mountains. This information is vital to evaluate the carrying capacity of the habitat (how many gorillas can survive there), changes in food availability, and other changes that may affect the mountain gorillas and other species in their ecosystem. It was a pioneering application of GIS technology to primatology. In fact, the Fund’s decision to move its administrative headquarters to Atlanta had been motivated partly by the need for access to a research university, and Georgia Tech fit the bill.

"Nick's creativity and great skill in GIS applications brought previously unimagined capabilities to our collaborative research effort to understand how gorilla groups use the Virunga volcano habitat,” says Dieter Steklis, Ph.D., a former Karisoke director who was the Fossey Fund's chief scientist during Faust’s early years with the organization. “The creative technology he engineered was also great fun, and a boost to our public presentation of the research. In the days before Google Earth, I recall how captivated we all were when he ‘flew’ us into the Virungas from space, followed by a virtual fly-through of the volcanoes. Until you see Nick in action, you might not guess the ferocious intellect lurking behind a humble, endearing demeanor. It was an honor for me to take Nick from the virtual Virungas out to Rwanda and to introduce him to the ‘real’ Karisoke gorillas for the first time."

Faust had an interest in the environment before his involvement with the Fossey Fund and had travelled extensively, including to Africa, helping a private software company understand and meet consumers’ needs. However, he had never been to Rwanda. Since 2000 he has visited Karisoke and the gorillas many times and even helped the National University of Rwanda set up its own GIS center in partnership with Karisoke, Georgia Tech and other institutions. His involvement with the Fund and its programs in Rwanda has continued to broaden.

“My wife Cheri and I are interested not only in the gorillas and their habitat but also in the people around the park and their interactions with the mountain gorillas,” says Faust. The couple took a special interest in Karisoke’s programs to help people who share the gorillas’ habitat. They contributed to installing clean water systems in Bisate Village, supported a project to offer a marginalized community an alternative to hunting in the forest, and helped support the modernization of Bisate Clinic – most recently, joining other donors in providing beds for the new hospital wing.

Eventually Faust offered to join the Fossey Fund Board of Trustees, to provide a scientist’s perspective. He became a member in 2008 and continues to contribute his specialized knowledge. At the Board’s March meeting he presented a series of maps showing changes in the mountain gorilla groups’ ranges over the years and their interactions, based on 12-15 years of data from Karisoke, whose researchers use Global Positioning Systems to track the gorillas’ movements.

“This is a really exciting and important time to be involved with the Fossey Fund,” says Faust. “The plans for Karisoke’s future, the new work in Congo, GRACE – there’s a lot going on. I hope to help shape the direction of Karisoke’s use of technology and the projects it will undertake, with my research background. It’s something my wife and I are both interested in: people and gorillas, nature and technology. Also it’s a small organization so we know all the people here and in Africa and can be actively involved, not just as donors, so we know it’s a very efficient use of funds.”