The first group of orphaned gorillas was successfully airlifted by helicopter today to the Fossey Fund’s new GRACE (Gorilla Rehabilitation and Conservation Education) Center in Congo, where they will begin a new life geared toward returning them to the wild. 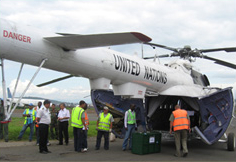 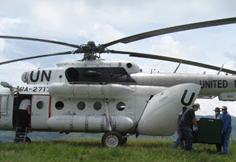 Democratic Republic of Congo (DRC), after weeks of planning and logistics, to move the gorillas from temporary facilities in Goma. This included building crates to hold the gorillas, training them how to get in and out of the crates, choosing take off and landing sites, organizing necessary personnel and hoping for good weather.

Just a few days earlier, storm clouds clung low on the horizon as the dust and heat filled the air on the streets of Goma. The welder had not finished the gorilla transport crates because there had been heavy rains and no electricity over the past few days. His open-air “studio” was located on the lava-encrusted side street and the crate-building process was behind schedule. 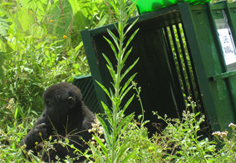 Eventually, the crates were ready, and Debby Cox, the Fossey Fund’s 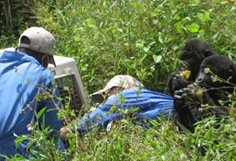 consultant on the building and operating of GRACE, kicked the door of a crate with all her might — and she is strong — explaining that a gorilla is five times as strong as a man. The doors needed to be stronger. The last thing she wanted was a gorilla running around a UN helicopter. 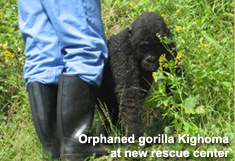 Sandy Jones, the Fossey Fund’s manager of confiscated gorillas, also wondered how she would get four rascally gorillas into their crates. Turns out that hurdle was not as big of a challenge as she originally thought. She anticipated luring them into the box with a sweet drink to get them used to it. However, the first day the crate was in the enclosure with the four young gorillas — Mapendo, Kighoma, Amani and Ndjingala — it quickly became their favorite toy. According to Jones, Mapendo kept running circles around it audibly laughing, while Kighoma ran in and out of the box. “They love it!” says Jones.

But things were a bit different today. The gorillas became stressed once in the crates and on the way to the airport, although once airborne they were either calm or sleeping, after a few moments where Kighoma was a bit aggressive toward Amani. 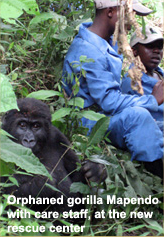 Jones has been looking forward to this moment since she arrived here over a year ago to take care of the gorillas and reports that the gorillas arrived safely at GRACE and are already adapting happily to their new natural surroundings.

“I cannot believe this is actually happening,” says Jones. “It’s so exciting.” She reports that they already seem at home and are eating all the natural foods waiting for them in the forested area.

Veterinarian Jim Desmond, the new director of GRACE, has also just arrived and has now met his new furry “bosses.” “They are hysterical,” says Desmond. “They look like they’re going to be a handful, that’s for sure.”

Stay tuned for updates on the gorillas’ first days at GRACE, plus photos and video!