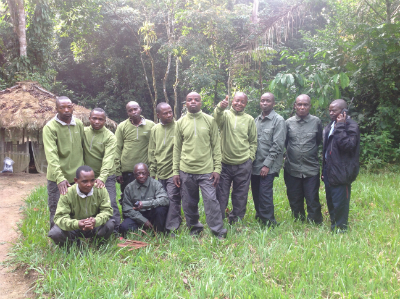 What does it take to monitor and protect groups of gorillas in the Virunga Volcanoes mountains every day, through frequent rain, with deep cold or steamy humidity, up mountains, through thick vegetation and stinging insects, in mud or on volcanic rock? It takes teams of dedicated, knowledgeable and tireless Dian Fossey Gorilla Fund trackers, researchers, technicians and anti-poachers walking for miles each day. But in these harsh conditions our teams could not do their jobs very well without being properly equipped and clothed, with such essentials as rain gear, waterproof pants, rubber boots, warm fleece, and thick socks.
Making sure all the field staff are properly equipped has historically been a significant challenge to the Fossey Fund’s operations, particularly as gear wears out so fast from heavy usage during long days in the field and extreme conditions. In the past, the Fossey Fund has generally purchased uniforms and rain gear, such as boots and pants, about twice a year. This is no small expense for a staff of some 150 people in Rwanda and the Democratic Republic of Congo.
To address the issue of both quality and cost of the uniforms we need, in 2013 the Fossey Fund was lucky to find a new corporate partner in Craghoppers, an outdoor/travel clothing company based in the U.K., that specializes in high-quality clothing for extreme conditions. In 2013, Craghoppers donated complete outfits for all of our field staff, including 323 pairs of trousers, 152 rain jackets, 153 fleeces, 368 shirts, 82 pairs of socks and 75 hats. The total cost of the kit and shipping to Rwanda added up to about $74,000 in retail price.
Craghoppers has a long history of working with communities and environmental/outdoors causes, because their customers are very aware of the environment, says company CEO Jim McNamara. “We were very impressed with what the Fossey Fund does, both to save gorillas and with local people,” he says. “The partnership will be a win-win for all of us and we are excited to extend our charitable work to an international level with such an important organization.”
The donation of field clothing turned out to be just the first step in a growing partnership between the Fossey Fund and Craghoppers, which now includes a fundraising campaign involving Craghoppers staff and the general public to support the Fossey Fund’s work. The public campaign will kick off with a public Google Hangout on April 8 (at 6:45 GMT), and feature top staff from the Fossey Fund and Craghoppers live from Google’s studios in London. 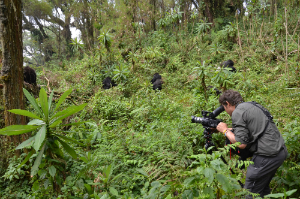 As part of the partnership, Craghoppers also sent a team to visit the gorillas and our Karisoke Research Center last summer, to film a documentary and photo advertisement campaign about the Fossey Fund showcasing our staff wearing Craghoppers’ products. Karisoke Director Felix Ndagijimana accompanied the Craghoppers team on a gorilla trek, and gorilla program coordinator Veronica Vecellio accompanied them on a hike to Dian Fossey’s grave. The video they shot will be narrated by Sir David Attenborough and shown in various venues this year.
“It just feels right for the brand, since our clothing is made for these kinds of extreme outdoor conditions,” says Craghoppers’ marketing manager Danny Heaton, who was part of the team that went to Rwanda. Seeing how well the specialty clothing works for the Fossey Fund field staff will help Craghoppers continue to learn how to improve the various items as well, since the feedback from these extreme field conditions will be most useful. “We are tremendously proud and quite humbled to be able to work with the Dian Fossey Gorilla Fund,” says Heaton.