Pablo and Susa: The Long-term Relationship Between Two Groups of Mountain Gorillas 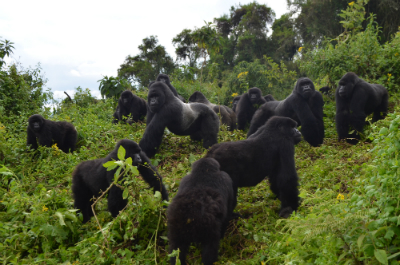 At the extreme west of the Virunga massif, which is home to about half of the remaining mountain gorillas, stands Mount Karisimbi, an inactive volcano and the highest of the Virunga volcanoes. It reaches 14,787 feet (4,507 meters) and is characterized by its steep slopes and dense, herbaceous vegetation.

For decades, this volcano has been the home of the two largest mountain gorilla groups ever observed ─ Pablo group (named for a former dominant silverback) and Susa group (named for a nearby river). It is not unusual for the two groups to interact, and sometimes females will move from one group to the other. For this reason, there is now a wide genetic overlap, with members of the same family in both groups.

Susa is one of the groups followed and monitored by the Rwanda Development Board for tourism. Even though the Fossey Fund does not directly monitor this group, we still keep records of main demographic events to continue to document the interesting relationship between the Susa and Pablo groups. The Susa group was first observed in 1978, by Dian Fossey and her team. Pablo group has been followed directly by the Fossey Fund for decades. It was originally Group 5, followed by Dian Fossey starting in 1967. When Group 5 split in 1993, it was renamed Pablo group.

During their observed histories, the two groups have met many times and 34 females have been seen to transfer ─ 14 who moved from Pablo to Susa and 20 who went the other way.

Both the Pablo and Susa groups grew over the years as well, each reaching record sizes! Pablo reached the amazing size of 65 gorillas in 2006, but then rapidly declined to 30, where it stands now. During the decline of the Pablo group, the Susa group became the largest, due mainly to the transfer of females from Pablo. Susa reached its largest size yet in Nov. 2014, with 42 gorillas.

Recently, the groups had a particularly intense interaction that lasted for four consecutive days and resulted in the transfer of four females from Pablo to Susa group. A few days after the last interaction, Susa split into two groups. Young silverback Igisha became the leader of a group of 24 gorillas, while the long-term dominant Kurira stayed with 17 members. The split occurred at the end of November, after the transfer of females from Pablo, and so far the two resulting groups are still apart. 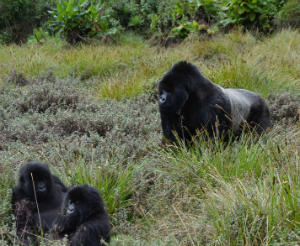 A similar trend was recently observed in Pablo, when the group split into two parts for some days in November. Although the two sides later reunited, we assume this may be the beginning of a more definitive split to come in the near future. We observed elderly but still-dominant silverback Cantsbee, 36 years old, leading half the group, and second silverback Gicurasi, 19 years old, leading the rest.

The current silverbacks, older and younger

The stories of the two main dominant silverbacks ─ Cantsbee and Kurira ─ are similar. Kurira was born in 1981 and Cantsbee in 1978. They each became dominant when they were 18 years old. In Susa group, silverback Kurira has been dominant since 1999, when the previous alpha male died. In Pablo group, Cantsbee became dominant in 1995, less than two years after the group formed from the split of the original Group 5.

After 15 and 19 years of leadership respectively, silverback Kurira and Cantsbee are clearly getting old and are challenged by younger males – 20-year-old Igisha in Susa group, and 19-year-old Gicurasi in Pablo group.

While the younger males are more involved in active interactions with neighboring groups, the two old dominants tend to keep a safer position close to the females. For example, in the last big interaction, neither Cantsbee or Kurira were directly involved. Still, the females and youngsters clearly continue to regard them as alpha males.

Due to intensive protection efforts, the population of mountain gorillas in the Virungas has been growing in recent years. This is resulting in the formation of more groups, as large groups are splitting and more solitary males are forming their own.

In this larger picture we have to consider the Pablo and Susa groups as the sources of an additional six groups (Isabukuru, Mafunzo, Musilikale, Karisimbi, Isimbi, Igisha) that are now also using the same slopes of the Karisimbi volcano. This was possible due to the presence of many silverbacks in both of the original groups. Some of them split from the main group and created their own (Isabukuru, Musilikale, Karisimbi, Isimbi and Igisha) while others left the group as solitary males and then formed their own groups (Mafunzo, Gushimira and Hirwa). Since most of these newer groups are still at least partly using the home range of the original group, we are seeing frequent encounters among them.