We are often asked whether mountain gorillas are still hunted, and if poaching remains a problem in the Volcanoes National Park. Thankfully, there have been no known deliberate gorilla killings in Rwanda since 1982. However, gorillas can fall victim to traps set for antelopes (black-fronted duiker and bushbuck). If caught, the gorillas' strength enables them to break free, but during the struggle a wire may cut into a hand or foot, and if these cuts become infected the animal may die.

During Dian Fossey's days, a juvenile gorilla — Lee — stepped into a concealed wire noose attached to a bamboo pole. While other group members displayed hysterically around her, Lee broke away from the pole with the wire still around her ankle, but she later died of gangrene. Fossey also wrote: "I observed three gorillas that had each been caught by a wire noose around the wrist… each became noticeably weaker before disappearing. None were ever seen again".

Anyone who has had the privilege of seeing Bruce Davidson's film "Shattered Kingdom" cannot have failed to be impressed by the sight of the silverback gorilla Luwawa smashing a snare. Luwawa's ability to recognise and destroy this danger to his family made all the more poignant his tragic death — shot dead in Zaire in 1995. Luwawa's acquired knowledge, gained through experience of poachers' snares, was lost. Would other members of his family have learned from their protector's behavior?

This powerful documentary was my first indication that gorillas were capable of recognizing snares and fortunately, although not truly surprisingly, the intelligent Luwawa was not alone. We have since seen evidence that silverbacks at Karisoke are also aware of snares intended for antelope.

Fossey had witnessed the gorillas' "trap sense": "Some gorilla groups seemed to be more "trap-wise" than others, perhaps because of having more experiences with the havoc caused by traps. One day I watched a group purposefully deflect their travel route from a fairly visible line of arched bamboo poles."

Karisoke assistant Ymke Warren coined the term "snare aware" after we saw silverbacks Pablo, Shinda and Cantsbee manifest behaviour around snares which indicated that they recognised the threat posed. In the past, the gorillas' home ranges were riddled with snares, thus they were likely to have come into contact with snares regularly and have learned through hard experience how dangerous they can be.

We have seen silverbacks' reactions to snares vary from avoidance, to threatening other gorillas to keep away (pig-grunting), even to the point of biting individuals who approached a snare. Usually the individuals threatened were immatures — infants and juveniles who could have had little or no experience of snares.

On one occasion the individual bitten was our assistant Ymke. Ymke's fieldnotes describe the incident: "Shinda chestbeats and charges downhill, disappearing from view. Arriving at the area where Shinda's original run was heard, observer sees a set wire snare. Observer removes snare and moves away. Observer is 2 meters from snare, with wire in hand, when Shinda reappears charging. Shinda charges again, ending 1 m from observer, he stands and stares away from observer for 60 seconds then turns and bites observer in thigh. He stands over observer for several seconds before moving off up hill 4 m."

Our interpretation is that Shinda's behaviour was particularly interesting. It could easily be assumed that Shinda associated Ymke with the snare and reacted to the danger by assaulting her. But take into account the time that these gorillas have spent in the company of Karisoke researchers — almost every day of their lives since birth — and their ability to distinguish between human individuals. We believe that Shinda was actually dissuading Ymke from coming into contact with the dangerous object, that his punishing bite may have been intended as a lesson.

When we regained access to the park and the gorillas in 1998, I was amazed to find the habituated population intact. How did they escape becoming trapped and maimed during a time that monitoring and anti-poaching activities were impossible, rendering the gorillas particularly vulnerable? The development of "snare awareness" may explain why apparently no gorillas were trapped. That they protected themselves is a testimony to the gorillas' intelligence and ability to learn.

Our "ultimate proof" of the silverbacks' ability to recognize snares came last year in the presence of a National Geographic Society film crew. The documentary "Gorillas on the Edge" shows a snare that was destroyed by Cantsbee in our presence. It was unfortunately not captured in the film — but almost….

So how did Mitimbili become snared earlier this year? Despite the vigilance of the Karisoke anti-poaching patrols and the gorilla trackers, Mitimbili, a juvenile gorilla was caught in an antelope snare during an interaction between Pablo's group and a solitary male. As the habituated lone silverback tried to follow Pablo's group, he was pursued by silverbacks Pablo and Umurava. The young males Isabukuru and Turatsinze were also active in trying to chase him off, whilst Cantsbee herded the females away. It was extremely unfortunate that Mitimbili approached and stepped into a snare whilst the males were distracted by the marauding silverback. The screaming and terrified youngster threw her whole body forwards in her efforts to escape, her leg jerking backwards, held stubbornly by the anchor. We immediately radioed the ORTPN park office to alert them to the incident, and the MGVC veterinary team in Kigali was contacted by telephone and asked to prepare intervention equipment to carry out a snare removal the next day.

Then we had to make a difficult decision: Cut the pole and set Mitimbili free with the lethal wire still around her foot, or wait in the hope that the distracted group would leave her behind, enabling us to get the wire off before freeing her? It seemed the group might move away, but after almost 30 minutes, Karisoke tracker Emmanuel could no longer bear to watch Mitimbili struggle. He cautiously moved towards the bamboo pole with a machete, well aware of the consequences of the silverback's wrath should he see or hear the cutting of the pole. Emmanuel cut the pole in one fell swoop but on hearing the crack of the bamboo, Cantsbee came charging back towards Mitimbili. Emmanuel dived for cover as I shouted in an attempt to halt Cantsbee in his tracks. The terrified youngster launched herself towards the silverback, dragging the wire and the end of the pole with her. A suspicious Cantsbee eyed us momentarily before escorting Mitimbili back to the group.

Next day, the vets accompanied us to Pablo's group and anesthetized Mitimbili, cut the remaining wire from her foot, and injected her with antibiotics. The wire had cut deeply and three stitches were used to hold the muscle and the sole of her foot together so it could heal. Unfortunately the blood supply to the toes was damaged, and Mitimbili lost two toes from her left foot as a result of the injury.

In addition to the physical handicap, Mitimbili was traumatized by this incident, which she could not comprehend. The juvenile did not leave Cantsbee's side for almost two months and was not seen playing with other youngsters for three months. She is now behaving normally and has no difficulty using her foot. 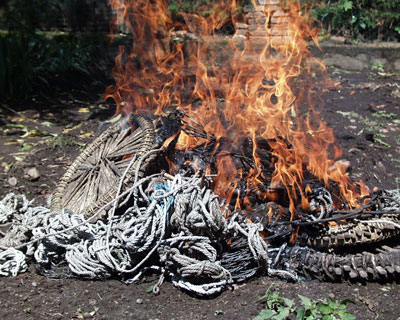 To protect the gorillas and other fauna in the park, Karisoke and the Rwandese National Parks Office operate daily anti-poaching patrols to destroy these snares. Karisoke staff collect and burn about 1,000 snares each year. We find smaller numbers of traps for buffalo and hyrax, which are not dangerous to gorillas, but are also illegal. We ceremoniously burn them, kind of our equivalent to President Moi of Kenya's burning of the ivory.