Fossey Fund trackers were surprised and delighted when they reached Isabukuru's group Monday morning, one of the groups monitored daily by the Dian Fossey Gorilla Fund in Rwanda: Sixteen-year-old female Isaro was found holding two newborn infants! Since the infants were dry, we assumed they had been born during the night or evening prior. Mother Isaro looked well, though visibly tired! 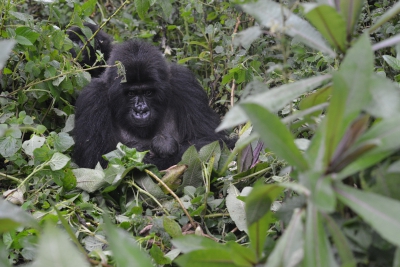 Twins are unusual among the mountain gorillas, and this is only the third case recorded among the groups monitored by the Fossey Fund (though none of those infants survived). There are several cases among groups monitored by Rwanda park authorities for tourist visits, including a pair born in 2004 who are still alive and well.

Mother Isaro also has a 6-year-old and a 3-1/2 year old in the group. This is the fourth group she has lived in and now counts 21 gorillas among its members, including the newborn twins.