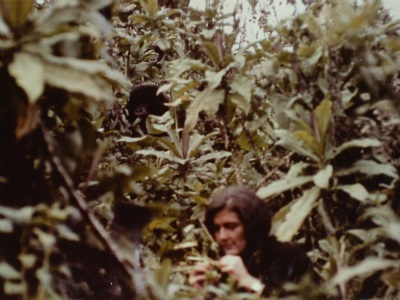 December 26 will mark the 30th anniversary of Dian Fossey’s death. While Fossey garnered mainly respect and admiration for her dedicated work in mountain gorilla conservation, she also created a number of adversaries—and her 1985 murder in her cabin in Rwanda remains a mystery to this day.

The anniversary of Dian Fossey’s death remains a somber one for our organization, but we choose to use this mark in time to reflect on some of the wonderful accomplishments that have occurred during the last 30 years, many of which we’re sure would have surprised Fossey.

We think she would be most proud of the increase in number of mountain gorillas since her time. During the 1970s, there were only an estimated 250 mountain gorillas left in the Virunga massif, and Fossey was not confident they would see the 21st century.

Another factor we think Fossey would be impressed by is that most of our work is now carried out by Rwandan staff, including the role of directing the Karisoke Research Center, which she founded. Felix Ndagijimana became the director of Karisoke on Jan. 16, 2012—on what would have been Dian Fossey’s 80th birthday—after first joining the Fossey Fund in 2004. Like Ndagijimana, many of our core staff are from Rwanda and have grown into their careers at the Fossey Fund.

Dian Fossey pioneered mountain gorilla research with discoveries about social relationships and hierarchies, vocalizations and noseprints. With the recent population growth and new, never-before-witnessed situations that reflect a dynamic population with limited habitat, scientists today are discovering how much more we have to learn.

Even in the last year, the Fossey Fund has seen many accomplishments, in addition to daily monitoring of the mountain gorillas in Rwanda, including the now-daily monitoring of Grauer’s gorillas in nearby Congo (the only regular on-the-ground presence in Congo) and assisting in a 75% decline of snares in Volcanoes National Park through a poacher education campaign. We hope Dian Fossey would be as proud as we are of the organization’s accomplishments, and we’re excited to see what we can do in the coming new year.