Elderly female mountain gorilla Maggie, along with her 5-year-old son Gasore, left Ugenda's group on Feb. 17. She was then seen by Fossey Fund trackers with lone silverback Giraneza. However, she seemed to be trying to avoid Giraneza, who was displaying toward her, following her, and making sexual vocalizations.

Since then, young Gasore has returned safely to Ugenda's group but Maggie has not been seen again. A special team has been dispatched to search for her. They are finding fresh traces mixed with older ones, so we are hoping she will be located soon. They did see lone silverback Giraneza by himself, however, on Saturday. 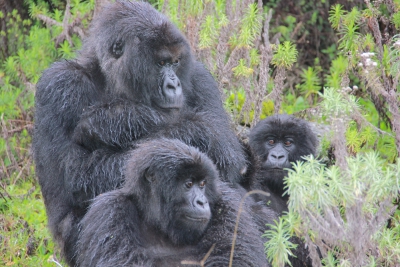 Maggie's movements affected not only her son, but also subadult female Akaramata, who also briefly left the group at the same time, presumably to look for Maggie. Luckily, she has returned to the group as well.

These developments have some relationship to how Maggie and several others ended up in Ugenda's group, since they were once led by Maggie after the silverback of their group (Bwenge) died in October.

Unfortunately, Ugenda's group faced another sad situation today, with the death of Ukuri's infant. This infant, who was born on Christmas day, had appeared normal over the weekend, so the cause of death is not known at this time.