One of the more recently formed groups we follow is led by silverback Giraneza, who has a checkered history of forming small groups and then losing them in various interactions and other events, becoming solitary on multiple occasions. Currently, he has a group total of six, including three adult females and two infants. 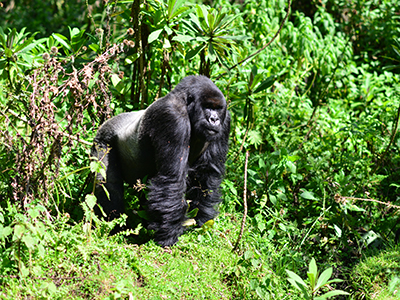 In early July, Giraneza left his females and infants behind, and approached another group (called Ntambara’s group), which was ranging about 2 kilometers away. He sneaked into this group and then jumped on the dominant silverback, Twibuke, knocking him to the ground. The two silverbacks then fought for a few seconds, with the females and younger males of Ntambara’s group soon reacting by screaming and trying to charge Giraneza away. This worked and caused Giraneza to start running away, with Twibuke following him for some time to make sure he stayed away.

This event took about an hour, at which point Giraneza had rejoined his little group and seemed to have calmed down. No serious injuries were observed. However, it seems that Giraneza has intentions to enlarge his group, though this unsuccessful episode may discourage him somewhat.

This latest interaction follows an intense encounter with another group that occurred in May, during which Giraneza attempted to drag away one of the other group’s females, leading to fighting among many of the gorillas in both groups, but no transfer.