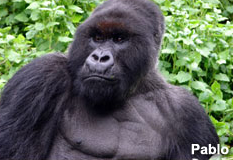 On the morning of July 13, 2008, DFGFI’s trackers at the Karisoke Research Center found that two important silverbacks — Pablo and Giraneza — were missing from one of the groups we track regularly. Pablo, a 34-year-old who was first seen and named by Dr. Dian Fossey, was originally the dominant male of the group, but had long since yielded that position to silverback Cantsbee, though he remained since then as the second in charge of the group. Giraneza, a 14-year-old silverback, apparently went with him.

The same morning, silverback Inshuti, who is now the leader of a small new group that contains only him and three females, was found seriously injured. He seemed unable to move from his nest site and had a large wound on his arm and several smaller wounds elsewhere on his body.

Since Inshuti’s group was ranging not far from Pablo’s group on the previous day, trackers believe that there probably had been an encounter between the two groups. A study of the trail of Inshuti’s group suggested this was the case, with flattened vegetation indicating an encounter among several individuals. Trackers believed that probably the silverbacks of Pablo’s group, including Pablo and Giraneza, stayed behind to face Inshuti, while the rest of their group moved away to safety.

Pablo was the dominant silverback of the group when it was first formed in 1993, but maintained that position for only one year, when current leader Cantsbee took over. However, he remained well respected within the group and in the last two years, as the group increased in size (and became the largest gorilla group known), he was observed to be leading a small subgroup that sometimes acted independently for several days at a time. 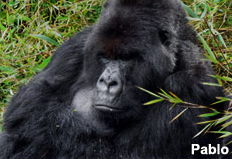 Pablo is also probably the best-known silverback among the gorillas that have been tracked by Karisoke throughout its history. He was born in 1974 into what was then called “Group 5” by Dr. Fossey. This was one of the groups she monitored during her pioneering studies and she developed a particular affection for Pablo. He is mentioned frequently in her book, Gorillas in the Mist, where she wrote about his early days: “Pablo’s sense of frolic was infectious and his outgoing personality freely expanded within his first year, attracting many other immatures to him.”

Now that Pablo is missing, the group’s dynamics are beginning to change and adjust. Female Umwana, who was closely associated with him, seems to be the most affected and is now trying to gain more access to Cantsbee, which means competing with other females.

Giraneza was eventually found, alone and stressed, and then returned to the group where he was soon chased out by another silverback. But, since he is young and healthy, he should be fine even as a possible lone silverback. Inshuti is recovering from his wounds and should be fine soon as well.

However, the outlook for finding Pablo is diminishing, with even the most experienced trackers unable to find him during weeks of searching.