Great news from the Fossey Fund trackers today! After quite a few days without a clear leader, following the death of dominant silverback Ugenda on April 8, silverback Wageni was seen today back with the group! He was second-ranking when Ugenda was alive, but after Ugenda's death in an interaction with a lone silverback, Wageni separated from the group. 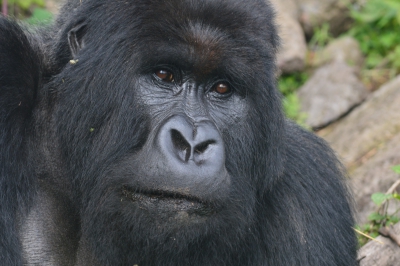 Today, trackers reported that Wageni had returned and seemed to get a "royal" welcome, with all the gorillas building a circle around him and touching him. In return, Wageni smelled them closely. Later, the youngest group member, Sabato, was seen grooming Wageni, and other affiliative behaviors were also seen.

It will be very interesting to see how Wageni grows into this new role as group leader, and how well he can hold out against competitors. He is rather small for a silverback and managed to escape from the interaction that ended up in Ugenda's death.

Missing subadult Ntaribi has also been located and is in good condition, but is alone and in a different area.