Last fall, the Dian Fossey Gorilla Fund field staff faced a new challenge in monitoring gorillas in Volcanoes National Park. Two groups in particular, Titus' group and Kuryama's group, began leaving the park regularly to feed on eucalyptus in the agricultural areas surrounding the park, and then choosing to sleep outside of the park rather than return. Although gorillas had ventured out of the park in the past, they had not slept outside of the park before last November. 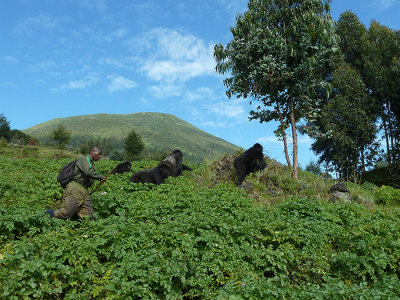 Bamboo shoots become available from May to June and from October to November. After last November, we expected to see gorillas ranging out of the park again in May and June when the next bamboo shoot season would begin. But May and June passed with few out-of-park events, giving us hope that the gorillas had been discouraged from leaving the park since Fossey Fund staff regularly herded them back inside the park boundary when they ventured too far.

However, Titus' group left the park this past Sunday, choosing to sleep outside of the park rather than return to the forest. Fortunately, they came out near where our anti-poaching camps are located, allowing the Fossey Fund's anti-poaching teams to keep an eye on the gorillas for the night. Then, yesterday evening, Titus' group again ventured outside of the park, this time travelling as far as 1 kilometer from the park boundary-just a 10 minute walk from the nearest road! Concerned for their safety, the anti-poaching team attempted to herd the group back inside the park boundary and was successful.

Gorilla groups who sleep outside of the park face a number of risks to their safety. The land surrounding the park is used for agricultural purposes, meaning that many people and domestic animals spend time in these areas. When gorillas visit the agricultural fields, they can easily contract diseases from the animals and people. Moreover, the gorillas like to feed on eucalyptus, which is an important crop to the local people. By eating the eucalyptus, they begin interfering with the livelihoods of communities around the park. For the safety of both people and the gorillas, the Fossey Fund must provide special monitoring teams to spend the night with gorillas who sleep outside of the park. This is both expensive and logistically difficult as we must hire additional temporary staff and supply them with food and equipment for the night.

After Titus' group's ventures this week, we have made the decision to hire temporary staff for this season to provide, for the second year in a row, round-the-clock monitoring of all Fossey-Fund monitored groups who sleep outside of the park.